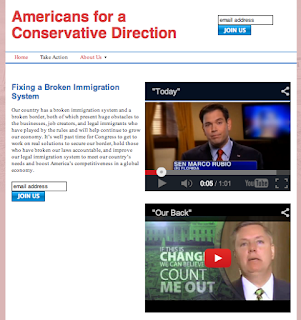 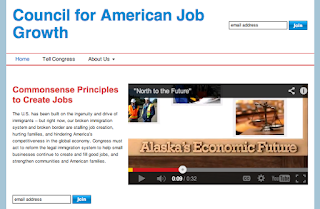 Eventually, Facebook billionaire Mark Zuckerberg's new immigration group lobbying for lower salaries for American tech workers, FWD.us, might get around to giving a facelift to one of the websites it set up for its twin Republican and Democratic sockpuppet subsidiaries. When that happens, the naked contempt with which Zuckerberg and his fellow billionaires view the American two party system won't be quite so blatant. But, in the meantime, enjoy Zuck's view of the profound struggle between Team Red-Blue versus Team Blue-Red.

As FWD.us spokesdroid Kate Hansen explained, "Maintaining two separate entities, Americans for a Conservative Direction and the Council for American Job Growth, to support elected officials across the political spectrum — separately — means that we can more effectively communicate with targeted audiences of their constituents."

The red-blue website features a commercial of Marco Rubio making a pitch for the Gang of Eight and an ad Zuckerberg is running for Lindsey Graham about what a conservative tough guy Lindsey is, which doesn't mention immigration. The idea is to persuade conservative voters in South Carolina that Lindsey, in general, has "our back," which would imply that they should support his Gang of Eight efforts because he knows best.

The blue-red website features a Lindsey-like ad for Sen. Mark Begich (D-AK) that serves as a quid pro quo for Begich supporting the Gang of Eight in return for Zuckerberg running this ad in Alaska to convince blue collar Alaskan voters that he wouldn't stab them in the back, so they can trust him when he votes for the Gang of Eight's plan.