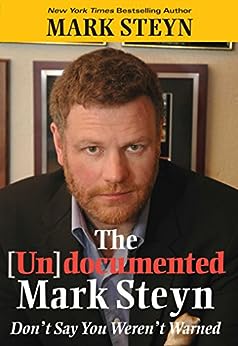 Kathy Shaidle: "Mark Steyn mentions me twice in his new book… And other reasons to read it, according to me, at PJMedia.com."

Mark Steyn, above, is talking with Conrad Black about  the lawsuit Steyn is fighting over Global Warming.

This is not what I'd like to see him fighting about, but the free speech principle is no different than his previous fights about "hate speech" with Canadian Human Rights enforcers.

They're also talking about abuses of the criminal justice system by the Department of Justice, of which Conrad Black is also a victim.

I've written, on the subject of race and crime reporting, that the only time I ever saw a headline saying "Black Charged With Fraud" it was a white guy—and he wasn't really guilty.

Steyn is a legal immigrant—from Canada, not Britain—and as a legal immigrant is about the most documented person on earth, as both Peter Brimelow ("Dante would have been delighted by the Immigration and Naturalization Service waiting rooms.") and John Derbyshire (In the Belly of the Beast) found out.

The Undocumented Mark Steyn is a Greatest Hits collection (with added material) most of which is fascinating, and some of which could have been published here on VDARE.com, especially this one:

The short history of the Western Hemisphere is as follows: North America was colonized by Anglo-Celts, Central and South America by “Hispanics.” Up north, two centuries of constitutional evolution and economic growth; down south, coups, corruption, generalissimos, and presidents-for-life. None of us can know the future. It may be that Charles Krauthammer is correct that Hispanics are natural Republicans merely pining for amnesty, a Hallmark Cinco de Mayo card, and a mariachi band at the inaugural ball. Or it may be that, in defiance of Dr. Krauthammer, Grover Norquist, and Little Mary Sunshine, demographics is destiny and, absent assimilationist incentives this country no longer imposes, a Latin American population will wind up living in a Latin American society. Don’t take it from a right-wing bigot like me, take it from the New York Times. In 2009, Jason DeParle filed a story about suburban Maryland, in which he helpfully explained the municipality of Langley Park to Times readers:

Now nearly two-thirds Latino and foreign-born, it has the aesthetics of suburban sprawl and the aura of Central America. Laundromats double as money-transfer stores. Jobless men drink and sleep in the sun. There is no city government, few community leaders, and little community.

Instead of linking to that, I'm going to suggest that you buy the book.