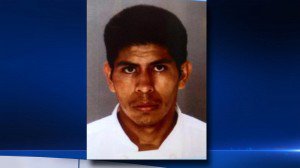 "Man Charged" In Philadelphia Apartment Is Hispanic, Something NBC Wouldn't Say When He Was At Large

We know that the "Man Charged" in the rape of a young female doctor in her apartment on Rittenhouse Square is Hispanic, because we can see his photograph (above) and read his name (Milton Mateo Garcia) in this NBC story:

A three-day hunt for a rapist, who police say repeatedly victimized a young doctor inside her Rittenhouse Square apartment this weekend, has ended with the arrest of a South Philadelphia man.

An earlier story [Young Doctor Raped During Rittenhouse Square Home Invasion, By Vince Lattanzio, Alison Burdo and Sarah Glover, June 23, 2014] contained this description, with no racial identification at all:

The suspect is described by police as a man, between 25 and 30-years-old, standing 5-foot-7-inches tall and wearing a black shirt and blue jeans.

All police descriptions contain information about race and skin color,and also, if applicable, whether the suspect is Hispanic. This is important for the public to know while he's still at large.

Another story from the same station contained the word Hispanic:

That story is from a young reporter with a Hispanic last name herself (Karen Araiza) who may not know the rules.