Majority of Summer Surge Illegals Don’t Show Up in Court

Wait, weren’t illegal aliens supposed to be pining for the whole enchilada of freebies, benefits and work permits — all with approval in writing? Now we learn that tens of thousands of newbies who blew over the border last summer with kiddies in tow are no-shows for their court hearings to get their amnesty applications rubber-stamped.

Below, Central Americans travel to stupid-generous America to get a boatload of freebies including free-to-them education for the kiddies, who are the tickets for entrance.

What’s the problem? Perhaps the illegals already get plenty of free stuff in the shadows — billions of dollars worth.

Jessica Vaughan of the Center for Immigration Studies discussed the issue with Neal Cavuto on Fox News Tuesday, noting, “The administration knew exactly what it was doing. They knew there were 400,000 cases pending in immigration court, but they went ahead and they told Congress and the American people, ‘Oh yes, we’re going to make these cases a priority’ and they knew very well that they were overloading the system, that people weren’t going to show up and nothing would happen to them.”

Vaughan had reported earlier about how few of the border surgers have been deported:

An investigative report by a Houston television station exposed that only a tiny fraction of the families and children who crossed in the border surge of 2012-14 are being returned to their home countries, despite Obama administration claims that the cases are a priority. According to immigration court records obtained by the station, only a few of the illegal family or child arrivals are qualified to stay in the United States, and the vast majority (91 percent) have simply absconded from their proceedings after release and joined the resident illegal population, where they are no longer a priority for enforcement under the new, expanded “prosecutorial discretion” policies.

The Houston reporters obtained statistics from the immigration courts on 30,467 cases of families and unaccompanied alien children (UACs) who arrived illegally between July 18 and October 28, 2014. Of these, only 22 percent (6,093) have been completed.

In addition, Cavuto reported that Mexico deported more illegals than the US from January to December of this year, remarking “Hypocrisy to no end” in reference to Mexican squawks about America deporting their fleebags. But the Mexicans are happy to send troublesome Central Americans home.

Mexico Number One! We know how Mexicans love to excel. 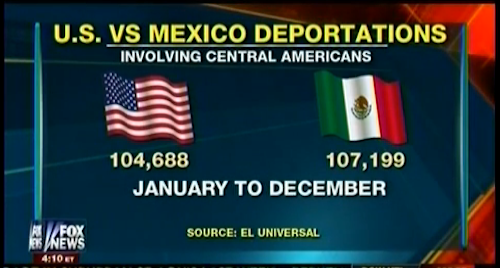 Mexico Deported More Central Americans Than US in 2014, Breitbart.com, December 29, 2014

During the immigration crisis of 2014, Mexico, a country known as an illegal immigration corridor used by human and drug smugglers, increased its deportation efforts and ended up surpassing the number of Central Americans that the United States deported during the year.

From January to December, Mexico deported 107, 199 Central Americans immigrants by land, while the U.S. only deported 104, 688 illegal immigrants during that time period. Of those deported by land from Mexico, 43,456 are from Honduras, 41, 731 are from Guatemala, 20,988 are from El Salvador and 1,024 are from Nicaragua, information released by the Guatemalan Migration Office to Mexican news outlets reveals.

In comparison to 2013, Mexico had only deported a little more than 77,000 showing a sharp increase in immigration enforcement for this year when hundreds of thousands of illegal immigrants from Central America swarmed the Texas border.

According to Mexico’s El Universal, U.S. authorities deported less Guatemalans and Hondurans by plane with the number of deportations decreasing from 88,563 in 2013 to 86,196 this year.

It remains unclear if Mexico’s increased interest in enforcement was due to pressure from the U.S. government. The current administration was under heavy criticism for their perceived failure in dealing with a humanitarian crisis.

As Breitbart Texas previously reported, the housing of minors by immigration authorities became a nightmare for the Department of Homeland Security since immigration officers were forced to stuff dozens of children and teenagers into small rooms.