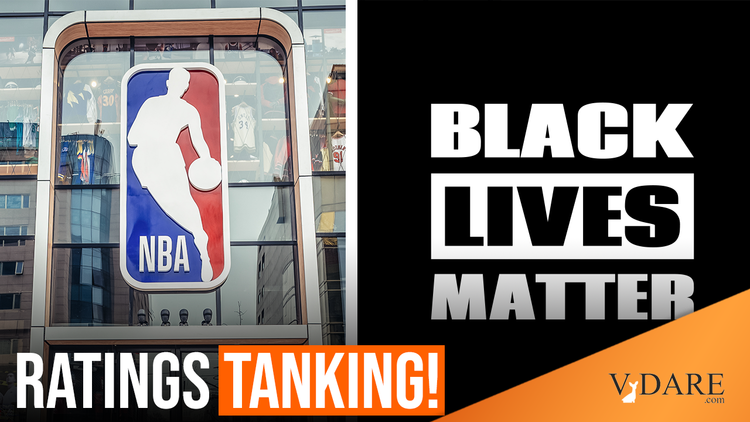 At a time when the Commissioner of the NBA has admitted the nearly 80% black league will abandon Black Lives Matter and Social Justice Warrior messaging in the upcoming season, the consequences of wokeness during the Summer of George Floyd have been immense.

As Clay Travis noted, the NBA has lost close to 80 percent of its television audience in the span of 25 years.

Does this correlate to the decline of the white fan as the league went all-in on matters of blackness? The answer is obviously “yes,” and the disastrous ratings for the NBA Finals—during a time of extreme social distancing across America—are a huge white pill for those wondering the direction of the nation.

A rejection of Black Lives Matter/SJW mindset is not so quietly underway, with the NBA’s embracing of these ideas a total ratings nonstarter.

LeBron James won his NBA fourth championship on Sunday, with the NBA’s marquee franchise, the Los Angeles Lakers. However, the spectacle of this event was not enough to curb the downward viewership trends for the NBA Finals. Here is a look at the six games this year versus the six games last year (viewership in millions):

The last time LeBron James played in the NBA Finals, in 2018 Cavs-Warriors, the games averaged 17.56 million viewers. This year represents a 57.6% drop from that.

Yes, there are a number of variables affecting the numbers. The NBA played out of season. There were no fans at the games, making the viewing experience feel less communal. There is a glut of live sports and only so many hours in the week with which to watch them, even if leagues are not in direct competition.

I also want to be fair and give Adam Silver and the NBA tremendous credit for pulling off the bubble. There were zero positive tests and the quality of play was consistently excellent. It would be revisionist history to say everyone thought this would succeed. Read these stories from USA Today and CNBC if you want to remember the profound skepticism about plans for the NBA.

But it warrants mentioning that a per-game average of 7.45 million viewers is the lowest as far as the public numbers go back, which is to 1986. The next-lowest was in 2007, when the Spurs swept the Cavs. Those four games averaged 9.29 million viewers. There are also more people at home now than normal due the pandemic, and the NBA and all sports are for the first time benefitting from out-of-home viewership getting counted immediately.

Undoubtedly, the factors cited above contributed to the drop. But, let’s say the NFL or SEC or Big Ten football were happening in the spring instead of the fall. Would they be down by half?

It is my opinion that there are also a number of viewers out there who do not want social justice messaging directly embedded into sporting events like it was in the NBA bubble.

NBA commissioner Adam Silver tacitly acknowledged this, in saying that he expects the messaging to disappear from the court in future seasons. “I understand those people who are saying ‘I’m on your side, but I want to watch a basketball game,’” Silver told Rachel Nichols last week. It later came out in the New York Post that Silver was surprised by the low viewership for the NBA Finals.

Turn off the NBA/NFL/NCAA/MLB/NASCAR and professional sports for good. Cut the cord and abandon streaming services, too. Life is too short to stay plugged into network/cable/streaming television, and the beauty of the NBA’s ratings decline—at a moment the league merged with the BLM insanity (even postponing games to honor Jacob Blake..)—is a major, major white pill.