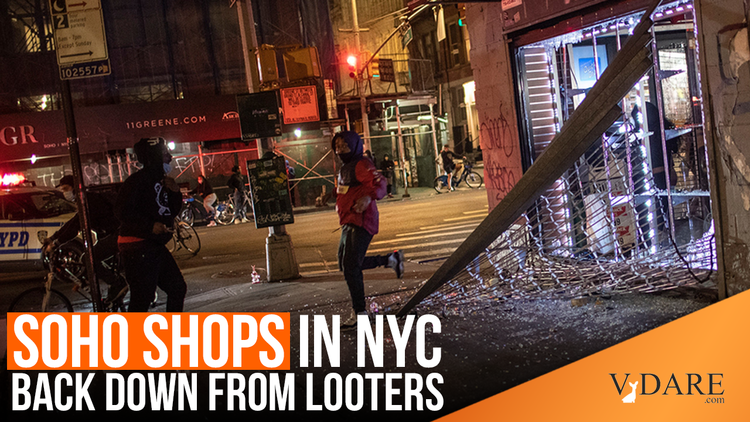 A nation held hostage by the word “racist.”

Every action to benefit civilization is held in a vise, because of the power this word (and accusation behind any move to retard the degradation of standards safeguarding polite society) carries to automatically neuter even the most thoughtful, airtight argument on behalf of the continuity of law and order.

In a world where St. George Floyd is a Patron Saint, ordaining every act of civil disobedience against the white patriarchy/systemic racist/implicit bias/structural inequalities created by evil colonizers (h/t Black Panther) to unfairly benefit their posterity at the expense of People of Color, it only makes sense some of the best high-end boutiques in New York City render unto the new Caesar lording over increasingly explicit Black-Run America.

Bands of shoplifters are terrorizing Soho’s high-end boutiques, lifting hundreds of thousands of dollars worth of designer merchandise, and in some cases, threatening security guards to keep quiet — or be labeled racist, The Post has learned.

The disturbing pattern began in late May during the riots that rocked the city in the wake of the George Floyd police custody death. High-end Celine was looted of $1.5 million in merchandise then, and the blatant thievery continues “every week” in ritzy stores such as Prada, Moncler, Dior and Balenciaga, one plugged-in local said.

“This is happening every week. Walk around Soho on Wooster Street and Greene Street, Mercer Street. … You have huge bouncers out there trying to deter hit-and-run activity,” the source, a restaurateur, said.

But in some cases, the thieves are given carte blanche to steal.

“If they [store personnel] stop them and say anything in the store before they’ve left the building then it often gets turned into a racial accusation,” the source said.

“The brands … tell their employees to walk away,” the insider added. “They don’t want to be the next Instagram video claiming they are a racist brand.”

NYPD Sgt. Joseph Imperatrice, founder of Blue Lives Matter NYC, told The Post that investigators are aware that “mobs of young, transient groups” have “bulldozed through aisles grabbing as much as their arms can hold.”

A law enforcement source confirmed that “dozens of larcenies have occurred in recent months in high-end establishments in the neighborhood.” The source said the victimized stores include Adidas, Fendi and Burberry.

The suspects create a stir and grab as much merchandise as they can, confident they’re not going to face resistance or consequences, the same source said, adding “it’s a lucrative business.”

Why not just make it legal for blacks to procure any item they want in any store in America? That way, corporate America can truly embrace being financially in the black. As standards protecting civilization melt away due to the coercive power of the word “racist,” we’ll find out the truth of the term the Visible Black Hand of Economics, as more and more stores close up shop and retail deserts bloom where once commerce thrived.

A nation held hostage by the word “racist.” Our future is in jeopardy as our past is rewritten because we can’t muster the courage to end this insanity.