Like numerous conservative outlets, the Daily Caller has smacked actor Matt Damon as a hypocrite for putting his kids in private school after being a loudmouth for public schools. A Hollywood liberal who is a phony and doesn’t follow his own stated beliefs?? What a surprise.

Hey, I’ll admit to being appreciative of Damon’s talents, in particular his performance in Team America World Police:

Damon made the choice during his move from New York City to Los Angeles. Perhaps he realized that LA has a special kind of intense diversity that may not present a valuable educational experience for Hollywood elite kiddies. One fact is revealed in the Los Angeles Unified School District fact sheet for 2011-2012 — the percentage of white students does not even reach 10 percent, while Hispanics number almost three-quarters. 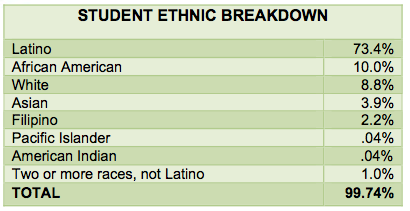 The LAUSD is a behemoth territory encompassing 710 square miles serving all of the city of Los Angeles plus part or all of a couple dozen other communities, with an enrollment of 920,000 and a budget of $6.6 billion for 2011-12.

In liberal communities, lip service is paid to educational diversity, but in practice it’s quite a different story. In uber-left San Francisco over 29 percent of students attended private school as of 2005, a rate that was nearly three times the national average. Los Angeles the city is tops nationwide in charter school enrollment, but private school numbers are curiously hard to find. 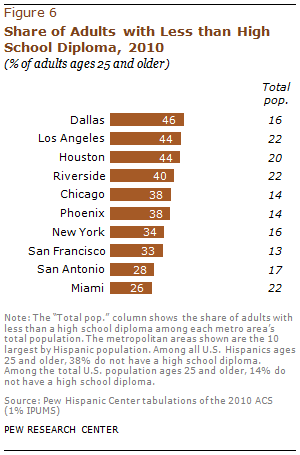 Another measure of diverse scholastic failure is illustrated by the chart showing that 44 percent of adult Hispanics in the city of Los Angeles do not have even a high school education, the second worst level in the nation. The chart is a little confusing as a stand-alone, but it does clearly mean Hispanics in the original 2012 Pew study, Characteristics of the 60 Largest Metropolitan Areas by Hispanic Population.

Los Angeles is a stew of hispanic diversity failure, from school dropouts to gang crime. Damon has said the schools aren’t “progressive” enough, which they most certainly are at least according to their diversity, which is definitely a progressive value.

Matt Damon loves public schools for your kids, but not his, Daily Caller, August 6, 2013

The mega-wealthy, left-wing actor divulged his decision in a weekend interview with a British newspaper, reports the Daily Mail. He was promoting a new science-fiction movie, “Elysium.”

Perhaps the most delicious part of the story is Damon’s wacky rationale: he says public schools just aren’t sufficiently “progressive” to suit his politics.

Damon, 42, is moving to Los Angeles from New York. Just like millions of Americans, except in the completely opposite way, he claimed he doesn’t “have a choice” when it comes private schooling.

He did call public schools “unfair,” though, and not what they were back when he was a kid.

“I mean, I pay for a private education and I’m trying to get the one that most matches the public education that I had, but that kind of progressive education no longer exists in the public system. It’s unfair,” Damon said, according to the Mail.

He also said he will endeavor to “agitate” to create better public schools.

“Sending our kids in my family to private school was a big, big, big deal. And it was a giant family discussion,” Damon also swore.

In 2011, Damon made waves when he gave a rah-rah speech at a Save Our Schools march in Washington, D.C. The thrust was that teachers are wonderful and standardized tests are really bad.

At the event, the actor, who is estimated to be worth at least $100 million, also yelled at a cameraman from Reason (the libertarian publication) for having the temerity to suggest that perhaps all teachers aren’t wonderful.

Damon and his wife, Luciana, have four daughters (one of whom is Damon’s stepdaughter).

Damon was a sheltered student during his academic life. He attended two public schools: Cambridge Alternative School and then the elite Cambridge Rindge and Latin School, which has recently become famous as the alma mater of both Dzhokhar Tsarnaev and Tamerlan Tsarnaev. He also attended Harvard University but failed to graduate.