Tribal Chinese were out in force on Saturday, squawking about CNN's Jack Cafferty, who had the temerity to speak honestly when describing the products of their beloved communist homeland. 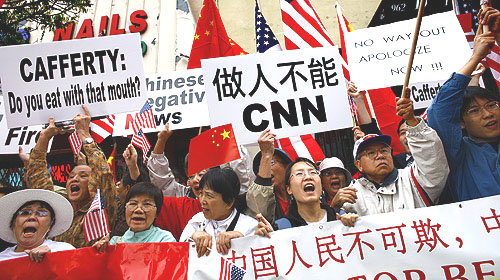 More than 1,000 ethnic Chinese protesters assembled near CNN's LA office to shriek "Liar" at Jack Cafferty and demand his dismissal.

Because they have absorbed a pre-Cliff-Notes grasp of freedom of expression, one member of the model minority prefaced his demands that Cafferty be fired by the usual disclaimer. It followed a familiar pattern: "I support free speech, BUT..."

"We understand free speech," said Lake Wang, 39, of Thousand Oaks. "But what if Cafferty said this about other racial groups? I think he would be fired. I think he's jealous of China." [Thousands in Hollywood protest remarks from CNN's Jack Cafferty, LA Times, April 19, 2008]

R-i-i-i-ight! Red China is far too special to be criticized by a mere American.

Plus Cafferty (and millions of other Americans) are green with envy that the People's Republic has achieved economic growth by maintaining an authoritarian police state and creating air visible to the naked eye. You betcha!

And what terrible thing did Jack Cafferty say on CNN?

Cafferty made the comments during an appearance on "The Situation Room" that aired April 9.Speaking about the U.S. trade deficit with China, Cafferty commented: "We continue to import their junk with the lead paint on them and the poisoned pet food and export, you know, jobs to places where you can pay workers a dollar a month to turn out the stuff that we're buying from Wal-Mart.""So I think our relationship with China has certainly changed," he continued. "I think they're basically the same bunch of goons and thugs they've been for the last 50 years." [SoCal Protest Slams CNN For McCafferty China Slurs, KPIX-TV, San Francisco, April 19, 2008]

Obviously the timeframe Cafferty used clearly limited his comments to the commie government. But racism is such a handy all-purpose stick for stirring up trouble.

So we are not only being poisoned by the PRC's crummy manufactured items from kids' toys to medicine, we are supposed to shut up and be grateful to their local representatives. Another unexpected benefit of diversity immigration!