In Los Angeles, Mayor Tony Villaraigosa and his police chief Charlie Beck have rolled out a new policy to benefit illegal aliens that will seriously undermine public safety. Presently, when an officer comes in contact with an unlicensed driver (often an illegal alien), the vehicle is impounded for 30 days as a punishment for illegal driving plus the money needed to bail out the car. The proposed new policy would allow the lawbreaker to call a friend to come retrieve the car or truck: therefore no punishment.

The change would essentially remove licensing as a requirement for driving. It’s a recipe for roadway anarchy and death. Unlicensed drivers are involved in one in five fatal crashes according to a 2008 study from the AAA Foundation for Traffic Safety. 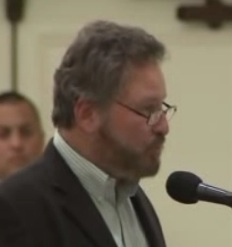 Nobody pretends that the change is anything but a convenience for illegal aliens. LAPD Chief Beck has said impounds and the associated fees represent an onerous burden to people “who are a valuable asset to our community and who have very limited resources.” No officials in city government worry that poor citizens are harmed by expensive tickets they might incur.

The situation is a little confusing because California disallowed the impound of vehicles at roadway checkpoints as of 2012. The Los Angeles measure covers any situation of unlicensed drivers coming into contact with police. So an unlicensed illegal alien could run down a pedestrian in a crosswalk and be allowed to keep his car under the new LA policy.

On Tuesday night, the Police Commission held a forum in Northridge, and hundreds of concerned citizens showed up (many listeners of the John and Ken radio program, presumably, since they have been publicizing the issue). Don Rosenberg (pictured) spoke as the father of a son killed by an unlicensed illegal alien driver who had been previously arrested but released.

“The car should be confiscated and the driver should be arrested, and if they are caught again, then just keep jacking up the penalty until this stops,” Rosenberg said. “There’s over a million unlicensed drivers in California, and they’re killing people every day.”

You can also hear a description of the meeting on the John and Ken show from January 18 which includes a recording of Rosenberg’s remarks about how liberal impound policies lead to injury and death, plus his later reflections live on the radio show.

LOS ANGELES, Calif. (KTLA) — The LAPD is looking to changing the department’s policy for towing and impounding cars belonging to unlicensed drivers, and that is sparking outrage among many people.

If officers stop an unlicensed driver under current laws, they tow the vehicle and impound it for 30 days.

After their vehicles are impounded, they face stiff fines and can’t get to work.

Changes to the LAPD’s policy would lift the 30-day impound and give either the registered owner or a licensed driver a reasonable chance to retrieve the vehicle.

One person opposing the changes is Don Rosenberg, whose 25-year-old son Andrew was killed in an accident involving an unlicensed driver in 2010.

“He was arrested,” Rosenberg said. “His car was impounded.”

“Less than 24 hours later, he had signed the title over to another person. She got the car out of impoundment (sic), and he just started driving again.”

Rosenberg says he thinks the city should maintain a tough policy on unlicensed drivers.

“The car should be confiscated and the driver should be arrested, and if they are caught again, then just keep jacking up the penalty until this stops,” Rosenberg said. “There’s over a million unlicensed drivers in California, and they’re killing people every day.”

Rosenberg was one of a few hundred people who attended a community forum hosted by the Los Angeles Police Commission Tuesday night in Northridge meant to give residents the opportunity to express their opinions on the proposed changes to the policy.

And the residents’ opinions were resoundingly negative. Nearly everyone inside the packed meeting was upset over the proposed changes.

“It doesn’t matter if you’re legal or illegal. If you’re an unlicensed driver, you should not be driving,” one man told the commission.

Rosenberg received a resounding applause from the crowd when he spoke.

“If you think it’s fair, you come down the road and come meet my son in his cemetery and you tell him that this is fair,” Rosenberg said, addressing Beck and the commission.