It’s so tiresome to see the same old liberal response to a shocking terror attack in a major world city as happened in London on Wednesday, where a hit-and-run SUV and knife attack killed four and injured dozens.

Prime Minister Theresa May said Britons were “not afraid” — although maybe they should be, since after years of terrorist murders, British police still are mostly unarmed: the officer who was stabbed to death, 48-year-old Keith Palmer, was not carrying a weapon, even though he was posted near Westminster as part of the protective force.

Hello! London is no longer the same community that believed police without guns could be more reasonable and accepted by the citizenry. In fact, the city is no longer majority white, as of 2012, and it continues to become less British because of catastrophic immigration. In December, over a thousand muslims yelling Allah Ackbar marched in London, demanding a caliphate.

The muslim mayor of the city, Sadiq Khan, declared after the recent killings that such disturbances are part and parcel of living in a big city these days.

Prime Minister May also declared in response to the murders that it’s wrong to describe the attack as “Islamic terrorism” and further expounded that the killer’s suspected ideology was a “perversion of a great faith.”

Every liberal pol is an expert on the religion of Islam! (When it is actually a totalitarian political system.)

No expression of liberal grief can be complete without a vigil, and London held a tasteful British one in Trafalgar Square on Thursday that included some Islam-is-peace propaganda. 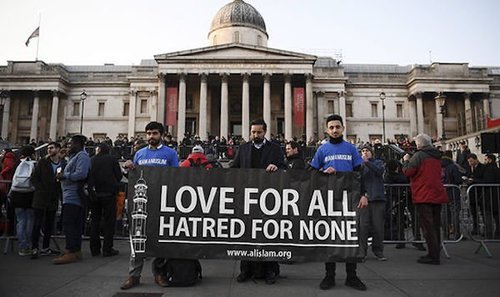 The response behavior is painfully predictable and exhibits so little understanding of what kind of relentless enemy the West faces in Islam. Being nice and accommodating won’t work, a point that was emphasized by Ayaan Hirsi Ali when she was interviewed by Tucker Carlson on Wednesday.

TUCKER CARLSON: Why is it that so many on the left — internationally, in this country, in Great Britain, all through Europe — have so much trouble coming to terms with the religious component of this violence?

AYAAN HIRSI ALI: I don’t know. I acknowledge as you do that it’s masochistic, it’s stupid, and I think if you look at the Islamists, they don’t go to the liberals and say, “Thank you so much for letting us take over; we’ll stop terrorizing.” They don’t do it.

CARLSON: So what you’re saying is the Islamists don’t want sensitivity above all, that’s not their goal.

HIRSI ALI: No, Islamists want one thing and that is a sharia-compliant society and eventually the world. That’s what their aim is; it sounds crazy to you and me and everyone else, but that’s the objective. And they want to get there through dawa — this is infrastructure of indoctrinating people into accepting it and other ways of intimidating, you know, forcing them to do it and jihad — violence. And whoever is in their way is their enemy, and it doesn’t matter how nice the liberals are, how accommodating and obliging they are — that’s the objective of the Islamists. And if you don’t understand that, then I don’t think you should be in the business of making legislation, in the business of informed leadership because you’re just incapable of understanding that problem.

Britain needs to snap out of its PC snooze and recognize that the enemy is inside the gates.