Golly, I thought that Muslims around the world were "relieved" that Osama bin Laden had been removed by the US military. After all, the man murdered Muslims with abandon all over. And perhaps Muslims imagined that Americans would no longer mistrust them. Right, that'll happen.

The press characterized the Muslim reaction with great regularity as "relieved" at OBL's demise. The Voice of America featured a flag-splashed photo from another event with its article, US Muslims Relieved at Death of bin Laden. (Apparently Muslims residing in this country didn't take to the streets to express their joy at bin Laden's deletion, as traditional Americans did.)

Bay Area Muslims joined others in hailing the death of Osama bin Laden and also expressed hope that the defeat of the 9/11 mastermind will lessen anti-Muslim sentiment in the country.

Say, maybe if the Sons of Allah were to stop murdering non-Muslims on a daily basis for jihad, that negative feeling would abate. Just a thought.

But back to Relieved: Utah Muslims relieved at bin Laden's demise and even in the city of Brotherly Love, Philadelphia-Area Muslims Relieved At News of Osama'sÂ Death.

Interestingly, the Relieved memo apparently didn't make it across the pond, where Muslims residing in Britain are angry indeed. They marched in front of the American Embassy in London and mixed it up with the local police, while promising that Islam's murderous jihad against Westerners would continue. Muslim immigration into Europe has brought violence, death and social upheaval, something Americans should consider more carefully regarding our own policies.

See other examples of Muslims who are not Relieved at Vlad Tepes Blog. 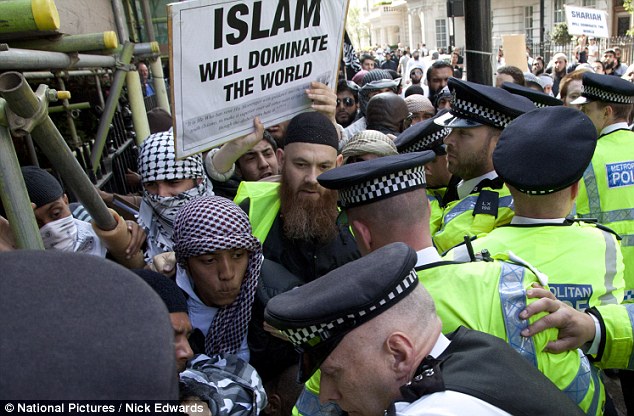 A protest by hundreds of Osama Bin Laden supporters sparked fury outside the US Embassy in London today as they staged a mock ”funeral service' for the terror leader.

Police stepped in to separate the protesters and members of the English Defence League amid threats of violence from both sides.

Radicals carrying placards proclaiming ”Islam will dominate the world' branded US leaders ”murderers' and warned vengeance attacks were ”guaranteed'. The protest came shortly after the verdict into the 7/7 inquest was released by Lady Justice Heather Hallett.

She recorded that the 52 victims had been ”unlawfully' killed when four terrorists attacked three London Underground trains and a bus in 2005.

Lady Justice Hallett made a string of recommendations to both MI5 to prevent further atrocities and to 999 workers to react more effectively to major events.

Relatives of the victims wept openly as the judge announced her verdict and she paid tribute to their ”quiet dignity' before reading the name of each person who died.

However just three miles from the Royal Court of Justice, Muslim protester Abu Muaz, 28, from east London claimed ”it is only a matter of time' before another attack and that the ”West is the enemy'.

The capital has seen heightened security in recent days over fears of a revenge attacks by Al-Qaeda members.

The protest against Bin Laden's death was organised by controversial preacher Anjem Choudary - who praised both 7/7 and the September 11 attacks.

The former UK leader of the outlawed al-Muhajiroun and member of the ”poppy-burning' Muslims Against Crusades extremist group called on the U.S. to return bin Laden's body to relatives.

He has already warned of another 7/7-style terror attack in the wake of Bin Laden's death.

Britain has followed the US in placing its embassies, diplomatic missions and military bases around the world on heightened alert in recent days.

An EDL member did manage to slip through police lines to unveil an effigy of Bin Laden in the middle of the 300-strong group of extremist Muslims.

The protests from both sides left onlookers in Grosvenor Square unimpressed.

Mary Smythe, 38, from Croydon, south London, said: ”I think both sides are pathetic, quite frankly.

”It's disappointing and horrible to listen to the threats. They are all an embarrassment to this country.'

Bin Laden, who masterminded the attack in 2001 on the Twin Towers in New York, was killed on Monday by U.S. forces in Pakistan.

The CIA spied on Osama Bin Laden for months from its own top-secret safehouse in Abbottabad, it has since been revealed.

In one of the most intricate intelligence operations in CIA history, spies moved in to a property next door to Bin Laden's fortified compound to establish his ”pattern of life'.