Below, Sailer quotes Mike Wise [Email him] of the Washington Post as saying

I will be here the next 10 days. And in that time, I will encounter no more than a dozen people of African American descent. They are the same ones I see over and over.

This is Lolo Jones, with her hair in a braid: 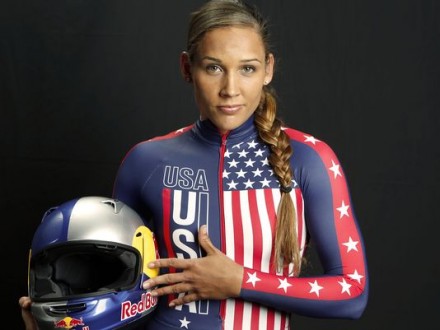 Lolo Jones is of partially African-American ancestry (Wikipedia says Jones' father "spent most of her childhood in the Air Force and later in state prison" ) but if Wise didn't already know that, I assume he'd put her down as one of the "whiter than Downton Abbey" crowd.

Here's the U.S. women’s bobsled team, Jones is one of the paler members, second from the left. Physically, Jones doesn't look much differnt from other Winter Olympians, like US luger Kate Hansen, seen below warming up before an event.