The former Vice President’s daughter is running for Senate against incumbent Republican Mike Enzi, and the main question is WHY, since Enzi is a reliable conservative on many fronts, including immigration enforcement.

Columnist Ann Coulter has criticized certain Republicans for self-centered opportunism in campaigns which has caused several disastrous losses in important races in recent years. Appearing on Fox’s Hannity show in October she remarked, “Why should we be having — and I love Liz Cheney — but why should we be having a rancorous primary against a good Republican senator other than for Liz Cheney’s ego?” Coulter has helpfully suggested that Cheney might better put her skills to work by moving to South Carolina and running against amnesty crusader Lindsey Graham.

Most of Sunday’s Fox interview concerned predictable topics of ObamaCare and general conservatism. 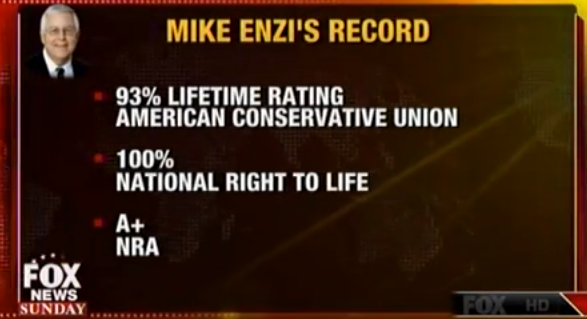 Unsurprisingly, the network did not include NumbersUSA’s immigration enforcement grade for Enzi (lifetime A -), even though many viewers might have found that information to be important.

The immigration subject did not come up at all in Sunday’s interview, so enquiring minds must look else for Cheney’s stance.

Liz Cheney speaks out on her campaign for US Senate Would you have voted for the Gang of 8’s immigration bill? I wouldn’t have voted for it. I think that there were too many good amendments, for example, that were not accepted, such as those offered by Sen. Cruz, that would have provided much more insurance in terms of border security. I am not comfortable with leaving so much discretion in the hands of the secretary for Homeland Security – to decide whether to carry out those provisions of the bill. And I think the bill as it stands now doesn’t deal with the most important issue we’ve got to address first, which is to secure the border.

This answer shows a severe lack of knowledge. In an effort to bring up the name of popular Ted Cruz, Cheney showed her ignorance, because he behaved like a potted plant at the Senate markup hearing where amendments were heard. Cruz submitted only five amendments to S.744 and one of those was to increase H-1b tech visas by 500%.

Cruz’ legislative list compared poorly to Senators Jeff Sessions and Chuck Grassley, who entered 49 and 77 amendments respectively. (The Senate’s list of amendments for the bill is available online.)

In addition, see my June article about the Senate markup and beyond, WaPo Compares Senator Sessions To George Wallace—He Must Be Doing Something Right!.

Back to Cheney, if she thinks Ted Cruz’ markup behavior was admirable, she is badly informed, to say the least. Plus she has shown no passion for immigration enforcement generally, which is often a bad sign of quiet squishiness.