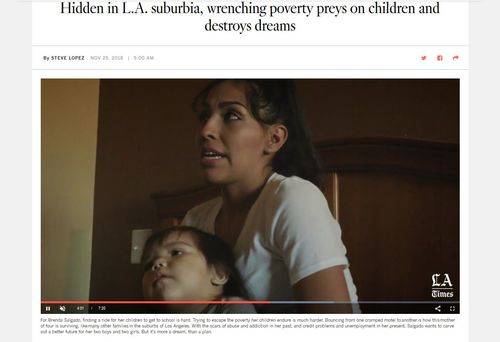 This story from the LA Times is very sad. [Hidden in L.A. suburbia, wrenching poverty preys on children and destroys dreams, by Steve Lopez, November 25, 2018] Uneducated, unskilled immigrants in several generations are not well off. Since 1970, ALL California population growth results from immigration. The numbers speak for themselves; 80% poverty in LA Unified School District.

Rich and I lived in LA in the late 60's and early 70's. We moved to Santa Barbara because LA was no place to raise children. We had the money to buy in a good school system, Goleta Valley.

Other school districts in Santa Barbara County have poverty rates worse than LA Unified. In the Santa Maria Bonita Unified School District, 99 percent of the school children receive free lunch. They are the children of farmworkers who mainly pick strawberries and harvest broccoli. 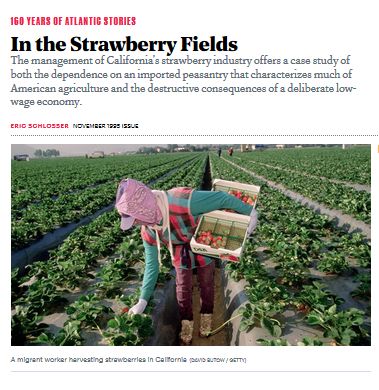 Santa Maria used to be a nice, middle-class city until 1986 when IRCA passed and millions of illegal aliens began moving to California to get amnesty. An abundance of unskilled farm workers made strawberries possible. They are very labor intensive. Farmers added acres and acres of strawberries. Middle class residents moved out. Eric Schlosser wrote it up for the Atlantic in In the Strawberry Fields .

[November 1995] I wrote it up here in How Much Is That Strawberry In The Window? and The Strawberries of Wrath: Abel Maldonado Plants A New People—At Taxpayer Expense.

Last week, Hillary Clinton and John Kerry said that Europe should quit taking in refugees. They had different reasons. Clinton said that all the refugees were making Europeans turn populist. John Kerry is worried about environmental consequences.

As for me, I think we need to take care of the poor people who live in our house before we invite more neighbors in.