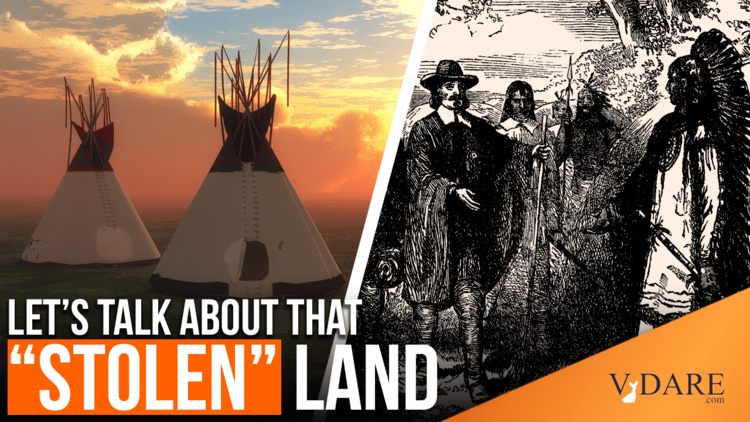 "Letting In Immigrants Means Letting In Your Future Rulers"

The Volokh Conspiracy law blog just turned 9 years old, and Professor Orin Kerr celebrated with a link to the first day's posting, from which I'll reproduce one whole post, by celebrated First and Second Amendment champion Eugene Volokh, an "immigrant himself", brought to the US from the former Soviet Union:as a child:

I just ran across a Conrad editorial cartoon from the L.A. Times: An American Indian is carrying a sign that says "Deport Illegal Immigrants." This, I assume, is meant to suggest that it's hypocritical for white Americans to oppose illegal immigration since America was, well, stolen from the Indians.

I think, though, that the cartoon illustrates the exact opposite. The whites immigrated to America — and took over the place. (I'm glad they did, but I can surely understand why the Indians might disagree.) Likewise, Jews immigrated to Palestine — and eventually there were more Jews in some parts than Arabs, so Jews started running the place. Now Israelis are sensibly objecting to Palestinians' asserted "right of return" to their and their parents' homes, because if enough Palestinians are allowed to immigrate into Israel, they'll start running the place.

The bottom line is that for all the good that immigration can do (and I'm a first-generation immigration to the U.S., who is very glad that America let me in, and who generally supports immigration), unregulated immigration can dramatically change the nature of the target society. It makes a lot of sense for those who live there to think hard about how those changes can be managed, and in some situations to restrict the flow of immigrants — who, after all, will soon be entitled to affect their new countrymen's rights and lives, through the vote if not through force.

I sometimes pose for my liberal friends a stylized thought experiment. Say that they live in a country of 3 million people (the size of New Zealand) where 55% of the citizens are pro-choice and 45% are pro-life (1.65 million vs. 1.35 million). Now the country is facing an influx of 1 million devoutly Catholic immigrants, who are 90% pro-life. If these immigrants are let in and become citizens, the balance will flip to 2.25 million pro-life to 1.75 million pro-choice (56% to 44% pro-choice); and what my friends might see as their fundamental human right to abortion may well vanish, in a perfectly peaceful, democratic way. It's unlikely that any constitutional protection will stand in the way: Even constitutions can be amended, and new judges can be appointed. Nor can one rely on "education" or "assimilation" — what if the immigrants simply conclude that their views on abortion are just better than the domestic majority's? I think many of the current residents may rightly say "We have nothing against Catholics; but we don't want our rights changed by the arrival of people who have a different perspective on the world than we do."

Letting in immigrants means letting in your future rulers. It may be selfish to worry about that, but it's foolish not to. For America today, that's actually not that much of a concern, because we're a huge nation whose culture is already so mixed (for which I'm grateful) that even millions of immigrants won't affect it all that greatly, at least for quite a while. But for many smaller and more homogeneous countries, extra immigration means a fundamental change in what the country is all about, and perhaps what the citizens' lives and liberties will be like. It's neither racist nor hypocritical to worry about that.

I think Volokh is wrong about immigration on today's scale being no danger, but it's still good thinking.