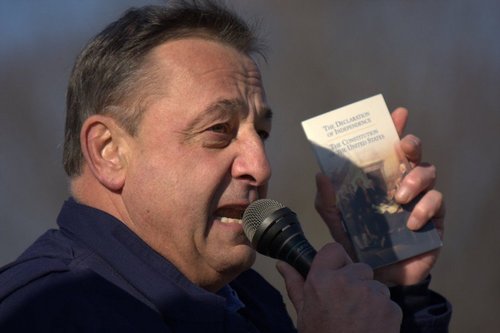 The amazing and indefatigable Ann Corcoran has a piece up at her hyper-busy Refugee Resettlement Watch blog about Maine's just re-elected Governor Paul LePage following through on a campaign commitment:

Longtime readers know we have closely followed the controversy in Maine (archive here) where the state had gained a reputation around the country (and probably the third-world) as the state to go to and apply for asylum. Why? Because even as federal law does not say asylum seekers can get welfare during their wait for the legal process to play out, Maine was giving hand-outs to the “undocumented.”

Republican Governor LePage vowed to reform Maine’s reputation as the go-to state for taxpayer-funded goodies and he was re-elected in blue New England.

And, btw, it was Maine’s generosity that attracted the first Somalis to Lewiston, Maine. See our entire Lewiston archive for the mess that created.

Have we found our Marine Le Pen, or Geert Wilders, or Nigel Farage, or Jimmie Akesson, or Matteo Salvini ?

Tea Party-backed LePage, who was re-elected last week with a strong mandate to reform the state's welfare system, had threatened in June to cut funding to municipalities that give state-reimbursed general assistance to undocumented immigrants.

"Tell your city councilors and selectmen to stop handing out your money to illegals," LePage said in a radio address.

And LePage is demonstrating real spine, as his re-election wasn't by a big margin: He won with 48.2 percent to the Democrat's 43.3 percent, the remainder going to an independent.

People like Senator Jeff Sessions [R-AL], Congressman Steve King [R-IA], Congressman Lou Barletta [R-PA}, and now Maine's Governor Paul LePage are distressingly rare in American public life, so I always like to ratify what they're doing via phone calls or notes of thanks and encouragement. Here's the text (slightly modified for presentation here) of the email I sent to Governor LePage after I'd read the Reuters/Yahoo story, under the subject line "Two thumbs up for your defund-illegal-aliens policy":

If I had more thumbs, they'd be up, too!

You recognized a significant problem.

You talked about it.

You made a related campaign promise.

Re-elected, you're following through.

It's all too rare these years that American officeholders recognize their central responsibility to their citizen constituents, act on it, and don't back down despite being scourged in the feckless, post-American media. May we clone you?

Especially because of its rarity, your action is of national significance. And if you look at the comments added to the Reuters article I've linked above—more than 2,200 as I write this—you'll see little to zero opposition to your stand. (Zero in my sampling of the first ~100. And the approving comments, themselves, get scads of thumbs-up votes.)

I'm a retired physicist who lived in southern California 1996 - 2005, so I might as well have a second advanced degree—by immersion!—in how immigration, legal and illegal both, is destroying our country.

For going on 17 years, I've been talking myself blue about this. So it's a blessing, at last, to see people in public office who understand.

Long may you wave!

My guess—I don't know for sure—is that it will be useful to Governor LePage if supporters of his action from all over the country write him email notes of appreciation. To be helpful, I think such notes should be brief (mine is probably longer than optimum), polite, factual, and mildly-stated. His email address is governor@maine.gov.