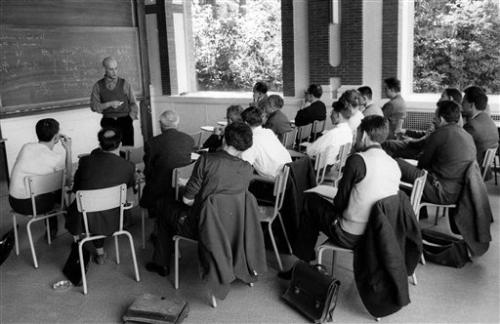 Alexandre Grothendieck, at the blackboard, during a lesson, south of Paris, in the 1960's.[/caption]The mathematician Alexander Grothendieck has died, aged 86. There are obituaries all over. Here's a brief one from phys.org.

I gave Grothendieck good coverage in Chapter 15 of my 2006 history of algebra. Here is what I wrote. It begins with the last paragraph of §15.6, in which I've been discussing category theory.

The philosophical connotations of category theory lie beyond my scope, though I shall make some very general comments about them at the end of this chapter. Certainly, though, there have been working mathematicians who have used the theory to obtain significant results. There has, for example, been Alexander Grothendieck.

§15.6 Grothendieck is the most colorful and controversial character in the recent history of algebra. There is a large and growing literature about his life, by now probably exceeding what has been written about his mathematical work. The most accessible and informative account of both life and work so far produced in English is Allyn Jackson’s “As If Summoned from the Void: The Life of Alexandre Grothendieck,” published in two parts in the October and November 2004 issues of the Notices of the American Mathematical Society, the two parts together running to about 28,000 words. There are also numerous web sites given over to discussions of Grothendieck. A good starting point for English-speaking readers (though it also contains much in French and German) is www.grothendieck-circle.org, which includes both parts of Allyn Jackson’s aforementioned biographical article. (Part I) (Part II)

Grothendieck’s story is compelling because it conforms to archetypes about certain fascinating “outsider” personalities: the Holy Fool, the Mad Genius, the Contemplative Who Withdraws from the World.

To take the genius first: Grothendieck’s years of glory were 1958–1970. The first of those years marked the founding in Paris of the Institut des Hautes Études Scientifiques (IHÉS). This was the brainchild of Léon Motchane, a French businessman of mixed Russian and Swiss parentage who believed that France needed a private, independent research establishment like the Institute for Advanced Study in Princeton. Grothendieck—30 years old at the time—was a founding professor at the IHÉS.

The privacy and independence of the IHÉS were eroded by its constant need for funding. Motchane’s personal resources were not adequate, and from the mid-1960s he began to accept small grants from the French military. Grothendieck was a passionate anti-militarist. When he could not persuade Motchane to give up the military funding, he resigned from the institute in May 1970.

During those 12 years at the IHÉS, Grothendieck was a mathematical sensation. The field in which he worked was algebraic geometry, but he was able to raise the subject to such a level of generality as to take in key parts of number theory, topology, and analysis too. Grothendieck was a charismatic teacher, whose corps of devoted students in the 1960s was thought by some to resemble a cult. His mathematical style was not to everyone’s taste, and disparaging comments about him are not hard to find. By the testimony of many first-class mathematicians who knew and worked with him, though, including some whose own styles are quite non-Grothendieckian, he was, in those glory years, a bubbling fount of mathematical creativity, throwing off startling insights, deep conjectures, and brilliant results nonstop. In 1966 he was awarded the Fields Medal, the highest and most coveted prize for mathematical excellence. “Built on work of Weil and Zariski and effected fundamental advances in algebraic geometry,” goes the citation.

§15.7 I introduced Grothendieck with the archetypes Holy Fool and Mad Genius. Though I myself cannot understand much of his work, comments on that work by mathematicians like Nick Katz, Michael Artin, Barry Mazur, Pierre Deligne, Sir Michael Atiyah, and Vladimir Voevodsky (there are three more Fields Medal winners in that list) are sufficient to persuade me of his genius. What about the holiness, folly, and madness?

The holiness and the folly are combined in a kind of childlike innocence, which everyone who has known Grothendieck has remarked on. Not that there is anything childlike about the man physically. He is (or at any rate was, in his prime) large, handsome, and strong and an excellent boxer. At a 1972 political demonstration in Avignon, Grothendieck, who was 44 years old, knocked down two police officers who tried to arrest him.

The intense concentration on his work, though—he seems, by all accounts, to have thought about very little but mathematics all through his 20s and 30s—left him unworldly and grossly ill informed. IHÉS professor Louis Michel recalls telling Grothendieck, around 1970, that a certain conference was being sponsored by NATO. Grothendieck looked puzzled. Did he know what NATO was? asked Michel. “No.”

His zone of ignorance extended into areas of mathematics he was not interested in—which is to say all mathematics except for the most utterly abstract reaches of algebra. He did not, for example, find numbers interesting. Mathematicians sometimes refer to the number 57—the product of 3 and 19 and therefore not a prime number—as “Grothendieck’s prime.” The story goes that Grothendieck was participating in a mathematical discussion when one of the other participants suggested they try out a procedure that had been suggested, applicable to all prime numbers, on some particular prime. “You mean an actual prime number?” Grothendieck asked. Yes, said the other, an actual prime number. “All right,” said Grothendieck, “let’s take 57.”

Grothendieck’s own miserable childhood undoubtedly contributed to his rather patchy understanding of the world and of mathematics. His parents were both eccentric rebels. His father, a Ukrainian Jew named Shapiro, born in 1889, spent all his life in the shadow world of anarchist politics, the world described in Victor Serge’s memoirs. There were several spells in tsarist prisons, and Shapiro lost an arm in a suicide attempt while trying to escape from the tsar’s police. Lenin’s totalitarianism did not suit him any better than the tsar’s authoritarianism had, so he left Russia for Germany in 1921, and made a living as a street photographer so as not to violate his anarchist principles by having an employer.

Alexander’s mother, from whom the boy took his name, was Johanna Grothendieck, a Gentile girl from Hamburg in rebellion against her bourgeois upbringing, living in Berlin and doing occasional writing for left-wing newspapers. Alexander was born in that city, and his first language was German. By the outbreak of Worle War II the family was in Paris. Both parents, however, had fought on the Republican side in the Spanish civil war and so were regarded by the French wartime authorities as potential subversives. Grothendieck’s father was interned; then, after France fell, he was shipped off to Auschwitz to be killed. Mother and son spent two years in internment camps; then Alexander was moved to a small town in southern France where the Resistance was strong. Life was precarious, and in his autobiography Grothendieck writes of periodic sweeps when he and other Jews would have to hide in the woods for several days at a time. He survived, though, managed to pick up some kind of education at the town schools, and at age 17 was reunited with his mother. Three years later, after some desultory courses at a provincial university, Grothendieck was advised by one of his instructors to go to Paris and study under the great algebraist Henri Cartan. Grothendieck did, and his mathematical career was under way.

Grothendieck’s autobiography expresses reverence for both his parents. Certainly the man is, as his father was, absolutely unbending in his convictions. Though he accepted the Fields Medal in 1966, he refused to travel to the International Congress of Mathematicians to receive it, because the Congress was being held in Moscow that year, and Grothendieck objected to the militaristic policies of the Soviet Union. The following year he made a three-week trip to North Vietnam and lectured on category theory in the forests of that country, whither the Hanoi students had been evacuated to escape American bombing.

Eleven years later—he was then 60 years old—Grothendieck was awarded the Crafoord Prize by the Royal Swedish Academy of Sciences. This one he declined altogether. (It carried a $200,000 award—Grothendieck seems never to have paid the slightest attention to money.) In his explanatory letter, soon afterward reprinted in the French daily newspaper Le Monde, Grothendieck railed against the dismal ethical standards of mathematicians and scientists.

All of this was in the true anarchist spirit. None of it was informed by the sour anti-Americanism that was already beginning to be a feature of French intellectual life. Nor, the Vietnam trip notwithstanding, has Grothendieck been any particular fan of communism or the USSR, as a great many French intellectuals have, to their shame. As an anarchist and a political ignoramus, Grothendieck probably thinks that all political systems are equally wicked, all armies mere instruments of murder, all wealthy folk oppressors of the poor. Some of the postmodernist cant of the age seems to have seeped into his brain. In the autobiography he remarks that:

"E]very science, when we understand it not as an instrument of power and domination but as an adventure in knowledge pursued by our species across the ages, is nothing but this harmony, more or less vast, more or less rich from one epoch to another, which unfurls over the course of generations and centuries, by the delicate counterpoint of all the themes appearing in turn, as if summoned from the void."

That is actually rather beautifully put, once you get past those italicized words (whose italics are mine) from the po-mo phrasebook.

§15.8 Holiness and madness. After resigning from the IHÉS, Grothendieck taught for two years at the Collège de France in Paris, but he had a disconcerting habit of giving over his lectures to pacifist rants. After a couple of attempts to start a commune—unsuccessful for all the usual reasons—in 1973 he took a position at the University of Montpellier, down on the Mediterranean coast, west of Marseilles. This was, by French academic standards, an extraordinary self-demotion. Most French academics spend years scheming to get a position in Paris and then, having gotten one, would submit to torture rather than give it up. Grothendieck gave Paris up without a blink. Nothing worldly ever seems to have meant much to him.

During his 15 years at Montpellier—he retired in 1988, at age 60—Grothendieck wrote his autobiography, Reaping and Sowing (never published but widely circulated in manuscript), as well as mathematical and philosophical books and articles. He learned to drive, atrociously badly of course. He became a minor cult figure in Japan, and parties of Buddhist monks came to visit him. He became “green,” hooked into the environmentalist movement, and protested to the authorities on this and numerous other topics.

In July 1990, two years after his retirement, Grothendieck asked a friend to take custody of all his mathematical papers. Soon afterward, early in 1991, he disappeared. Admirers eventually tracked him down to a remote village in the Pyrenees, where he remains to this day. Some sources say he has become a Buddhist, others that he spends his time railing at the Devil and all his works. Roy Lisker, who visited Grothendieck in his hermitage, reported in 2001 that:

"lthough direct communication with him is next to impossible, his neighbors in the village where he resides look after him. Thus, although he is known to come up with ideas like living on dandelion soup and nothing else, they see to it that he maintains a proper diet. These neighbors also maintain contact with . . . well-wishers in Paris and Montpellier, so one doesn’t need to worry about him."

The mathematics of Alexander Grothendieck’s golden years remains, and those who understand it—of whom I cannot claim to be one—speak of it with awe and wonder.