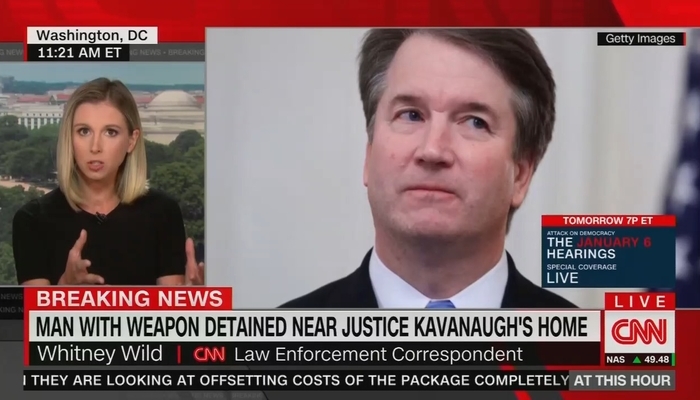 I don’t agree at all with blaming the [Supreme Court abortion opinion] leak for it, but yeah it’s sort of crazy that it’s not being treated as a bigger story (NYT homepage screenshot presented for posterity). There’s often more bias in which stories are deemed to be salient than how they’re written about.

The New York Times traditionally plays a major role in deciding what the rest of the news media treats as major news. E.g., Emmett Till is big news. In contrast, a black football player, Isimemen Etute, being acquitted even on manslaughter charges after he beat a white transvestite to death? Well, that’s a tough one for The Narrative to handle—who has more Diversity Pokemon Points?

On Friday, a black Virginia Tech linebacker was acquitted of charges of 2nd degree murder or manslaughter for beating to death a white man pretending to be a woman with whom he'd had sex. When the media gets around to it, will The Narrative be:

A liberal trying to assassinate a conservative Supreme Court justice? Okay, well, it’s front page news, but just barely, down at the bottom.

On the other hand, the Times‘ coverage tends to be factual, not fake news.

The man, Nicholas John Roske, 26, said he was upset about the shooting in Uvalde, Texas, and impending decisions on abortion and guns, a federal affidavit says.

A man armed with a pistol, a knife and other weapons was arrested near the Maryland home of Justice Brett M. Kavanaugh early Wednesday after he said he traveled from California to kill the Supreme Court justice, federal officials said.

Nicholas John Roske, 26, of Simi Valley, Calif., was charged with attempted murder after two U.S. deputy marshals saw him step out of a taxicab in front of the justice’s house in Chevy Chase, Md., early Wednesday morning, federal prosecutors said. Mr. Roske was dressed in black and carrying a suitcase and a backpack, according to a federal affidavit.

Inside the suitcase and backpack, the authorities later discovered a “black tactical chest rig and tactical knife,” a pistol with two magazines and ammunition, pepper spray, zip ties, a hammer, a screwdriver, a nail punch, a crowbar, a pistol light and duct tape, in addition to other items, according to the affidavit.

His plan was to break into the house, kill the justice and then kill himself, according to the affidavit.

Mr. Roske told the police that he was upset about the recent school shooting in Uvalde, Texas, and about a leaked draft of a Supreme Court opinion suggesting that the justices were poised to overturn Roe v. Wade, the landmark 1973 decision that guarantees the right to an abortion. There have been protests outside Justice Kavanaugh’s home and the homes of the other justices since the leaked draft was published last month.

In addition to the abortion ruling, the justices could strike down a century-old New York State law that places strict limits on the carrying of handguns. Both decisions are expected to be issued this month.

“Roske indicated that he believed the justice that he intended to kill would side with Second Amendment decisions that would loosen gun control laws,” the affidavit said.

In other words, the would-be assassin was motivated to violence by exactly what the New York Times in recent weeks considers Major News.

… Mr. Roske told the police that he had begun thinking “about how to give his life a purpose” and decided to kill a Supreme Court justice after finding the justice’s address online, the affidavit stated.

… During the appearance, in which he represented by a public defender, Mr. Roske was asked if he understood what was happening and whether he was thinking clearly, The Associated Press reported. “I think I have a reasonable understanding, but I wouldn’t say I’m thinking clearly,” Mr. Roske responded. He said he was on medication but did not specify what, and noted that he was a college graduate, The A.P. reported.

Efforts to reach family members of Mr. Roske for comment on Wednesday were not immediately successful. Mr. Roske graduated from Simi Valley High School in 2014, Jake Finch, a spokeswoman for the Simi Valley Unified School District, said by phone. Mr. Roske had been on the school’s cross country team, Ms. Finch added.

So he sounds like the politically correct California jogger version of the young-white-man-with-a-manifesto shooters that the New York Times has run countless articles blaming on Tucker Carlson mentioning the Great Replacement Theory.