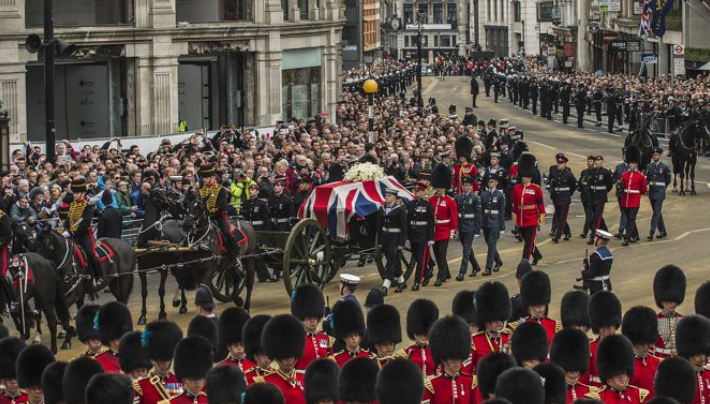 Looking at pictures of the respectful crowds, I couldn’t help noticing how very white they were.  (There are plenty of crowd pictures here.)

According to the 2011 census white Britons now constitute a minority in Greater London, and only 16 per cent in the borough of Newham, while in neighbouring Barking and Dagenham a third of the white British population had left the borough in the previous 10 years.

Is it just an age thing?  Most of London’s nonwhites arrived after the Thatcher premiership, and so can be forgiven for having insufficient interest in the lady to go watch her funeral procession.

Possibly; though I myself lived in Newham 1969-71, and there were already plenty of nonwhites living there.  Further: among those crowds watching the procession are many white Britons too young to have any recollection of the Thatcher years.

And if it was the case that the great post-Thatcher surge of nonwhite immigrants have no interest in the lady or her achievements, that gets you wondering whether perhaps one of the unspoken, perhaps unconscious goals of the mass-immigration boosters is the destruction of the historical memory of Western peoples.

As white as the respectful crowds were, gatherings expressing dis-respect for the lady were just as white—as white (if I may coin a simile) as a National Review cruise.

Which gets us back to my Cold Civil War theme:  all the big social conflicts of our age being between big groups of white people who can’t stand the sight of each other, with the colored races pulled in as occasional stage furniture, when we can remember to think about them.