The trailer for the upcoming remake of the 1984 comedy Ghostbusters with four female leads has not been greeted with enthusiasm. 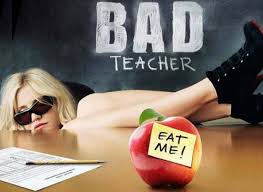 I want to point out, however, that there’s already been a successful $100,000,000 box office quasi-remake of Ghostbusters‘ top banana character, Bill Murray’s Dr. Peter Venkman, in 2011′s Bad Teacher starring Cameron Diaz. As I wrote in Taki’s five years ago:

Eisenberg and Stupnitsky (The Office) also wrote the screenplay for the still unmade Ghostbusters III. Presumably, Bad Teacher is their female version of Bill Murray’s Dr. Peter Venkman: a lazy, fraudulent educator who is, somehow, also a natural leader of men. Diaz can’t quite pull that off, but I don’t know if any actress could.

Bad Teacher may have been the first post-Obama movie, a scalding reaction to the sanctimoniousness that propelled Obama to the White House, somewhat as Ghostbusters seemed a distinctly Reaganesque morning-in-America movie.