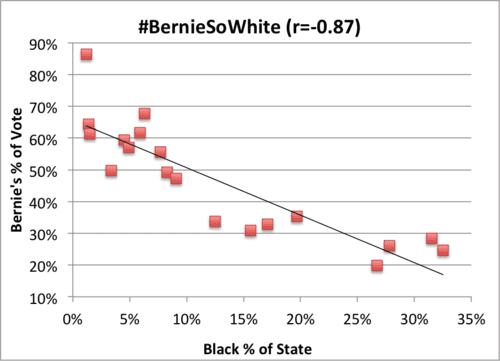 Bernie Sanders won another state today, his 8th in 19 contests.

Of course, Maine is the only state that is, arguably, whiter than Bernie’s own electoral fortress of whititude, Vermont. Across the first 19 states to vote or caucus, the correlation between Bernie’s share of the 2 candidate vote versus Hillary and the percentage of the state’s population that was black in 2014 is a remarkable r = -0.87.

Here’s a question: Can Bernie and his supporters even claim a moral victory? If Bernie loses because he got his ass kicked by black voters doesn’t that automatically make him not the moral winner but the immoral loser? By definition, blacks represent morality. Hence, because blacks hate him, Bernie deserves to lose