The Los Angeles Times has been doing a fair amount of drought coverage that can be worry-making (e.g. “Severe drought? California has been here before”), but on Monday it assured readers that 70 years of low rainfall won’t be a state killer. 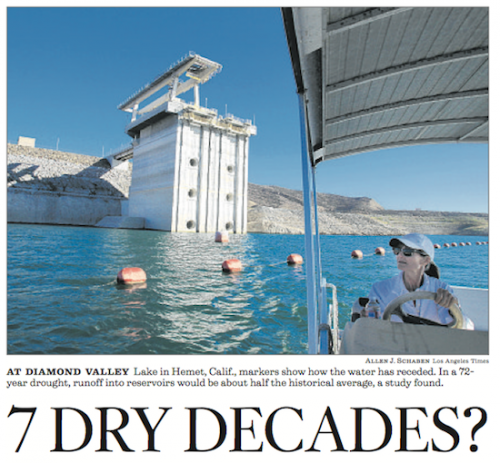 Well-read water worriers know about the Medieval mega-droughts that struck the west from 900 to 1400 AD, which is quite recent in terms of climate hiccups. Nature won’t take a holiday just because nearly 40 million California residents use water daily.

The preponderance of water use in the state goes for agriculture, but in times of drought the household user is exhorted to cut down and not waste.

The Times’ article is curious with its upbeat tone based on projections in addition to semi-cheerful quotes from experts that a mega-drought won’t be a complete disaster.

No farmers were interviewed for their opinions apparently, although the article noted, “Some farm communities would turn to ghost towns.”

Meanwhile the paper has no mention of the immigration-fueled population growth that driven the number of residents from 20 million in 1970 to an unsustainable 38 million in 2013. That extreme growth creates a lot more water users, right?

Note to elites who plan on hugely increased legal immigration following Obama’s executive amnesty: the west doesn’t have the water to support them.

And how reassuring is it that computer modeling tells us not to worry?

A few years ago a group of researchers used computer modeling to put California through a nightmare scenario: Seven decades of unrelenting mega-drought similar to those that dried out the state in past millennia.

“The results were surprising,” said Jay Lund, one of the academics who conducted the study.

The California economy would not collapse. The state would not shrivel into a giant, abandoned dust bowl. Agriculture would shrink but by no means disappear.

Traumatic changes would occur as developed parts of the state shed an unsustainable gloss of green and dropped what many experts consider the profligate water ways of the 20th century. But overall, “California has a remarkable ability to weather extreme and prolonged droughts from an economic perspective,” said Lund, director of the UC Davis Center for Watershed Sciences.

The state’s system of capturing and moving water around is one of the most expansive and sophisticated in the world. But it is based on a falsehood.

“We built it on the assumption that the last 150 years is normal. Ha! Not normal at all,” cautioned paleoclimate expert Scott Stine, a professor emeritus of geography and environmental science at Cal State East Bay.

“The weather record that we tend to depend on in California for allocating water … is based on about 150 years of really quite wet conditions when you look back at, say, the last 8,000 years or so,” Stine said.

He found evidence of two extreme droughts in ancient tree stumps rooted in the state’s modern lake beds. The trees could have grown only when shorelines beat a long retreat during medieval mega-droughts lasting a century or more.

Curious about how the nation’s most populous state would fare under such chronically parched conditions, Stine, Lund and other researchers imposed a virtual, 72-year drought on modern California. In their computer simulation, annual runoff into rivers and reservoirs amounted to only about half the historical average. Most reservoirs never filled.

Under that scenario, experts say, irrigated farm acreage would plunge. Aquatic ecosystems would suffer, with some struggling salmon runs fading out of existence.

Urban water rates would climb. The iconic suburban lawn would all but disappear. Coastal Californians would stop dumping most of their treated sewage and urban runoff from rain storms into the Pacific and instead add it to their water supply.

“Cities largely did OK aside from higher water costs, since they have the most financial ability to pay for water,” Lund said, referring to the study findings.

“They did more water conservation and wastewater reuse, a little ocean desalination, and purchased some water from farms,” he added. “So the predominant part of the population and economy felt the drought, but was not devastated by it.”

Mega-drought “doesn’t mean no water,” said Peter Gleick, president of the Pacific Institute, an Oakland think tank. “It will mean using what we get more effectively.”

In Southern California, withering decades would speed up the region’s move to expand local water sources and reduce dependence on increasingly erratic supplies from Northern California, the Eastern Sierra and the Colorado River.

“This is a situation that we’re likely to be dealing with for a long period of time, whether it’s 25 years in a mega-drought or repeatedly any number of years over the next 25 years,” said Nancy Sutley, chief sustainability and economic development officer for the Los Angeles Department of Water and Power. “We have to look at all the sources of water that are potentially available to us.”

The DWP is planning to build an expensive treatment system to cleanse industrially contaminated groundwater in the San Fernando Valley. It is reviving plans to replenish the local aquifer with highly treated wastewater — something that has long been done in Orange County and southeast Los Angeles County but was shot down in L.A. years ago by “toilet to tap” opponents.

If conditions got bad enough, L.A. could use its existing drought ordinance to ban landscape irrigation completely. But former DWP Commissioner Jonathan Parfrey doubts the city would go that far.

“On the one hand, you need to send a clear signal for conservation,” Parfrey said. “On the other hand, you don’t want to give Los Angeles a reputation of being in dire circumstances and sacrifice, because that could suppress economic activity.”

Instead, he said, the DWP should use its rate structure to make high water use extraordinarily expensive. “The days of making mini-Versailles around Los Angeles, I think, are over.”

It wasn’t exactly Versailles at the Metal Container Corp., which manufactures Anheuser-Busch beer cans in Riverside County. But the Mira Loma plant was surrounded by six acres of grass that annually slurped up about 15 million gallons of water — enough to supply roughly 90 Southern California households for a year.

“I used to come in the morning and I’d see the sprinklers flying,” plant manager Randy Burch said. “It was like a golf course without the golfers.”

The green carpet is gone now, replaced this year with drought-tolerant plants, desert rocks, mulch and a low-water drip irrigation system operated by a controller that measures soil moisture. Even the truck drivers like it. “We got a lot of compliments,” Burch said.

The company helped pay for the makeover with $360,000 in turf removal rebates, the bulk of it from the Metropolitan Water District of Southern California.

The 86-year-old water wholesaler supplies the region with water from Northern California and the Colorado River. But as those imports grow less reliable with environmental restrictions and recurring drought, Metropolitan is devoting more money and effort to promoting the development of regional water sources.

The district’s long-term plan projects that by 2035, 60% of Southern California’s demand will be met through conservation and local sources such as recycling and cleaned-up groundwater basins, compared with about 40% now. “It’s a huge shift,” said Debra Man, Metropolitan’s chief operating officer.

As the sector with the greatest water use in California by far, agriculture would sit in the bull’s eye of a mega-drought.

The state’s 8 million acres of irrigated cropland could fall by as much as half, predicted Daniel Sumner, director of the University of California Agricultural Issues Center.

Farmers would largely abandon relatively low-value crops such as cotton and alfalfa and use their reduced water supplies to keep growing the most profitable fruits, nuts and vegetables.

They would let fields revert to scrub or dry-farm them with wheat and other crops that predominated before California’s massive federal irrigation project transformed the face of the Central Valley in the mid-20th century.

“In a sense, we move back to the future,” Sumner said.

Some farm communities would turn to ghost towns. “For a while, poor people would get a lot poorer throughout the Central Valley,” he said. “Then they’d move.”

But agricultural production and associated industries such as food processing make up only about 4% of California’s overall economy, Sumner noted.

“Are there ripple effects from a reduction in agriculture through the state economy? Yes,” he said. “Are they a big deal in total percentage numbers? No.”