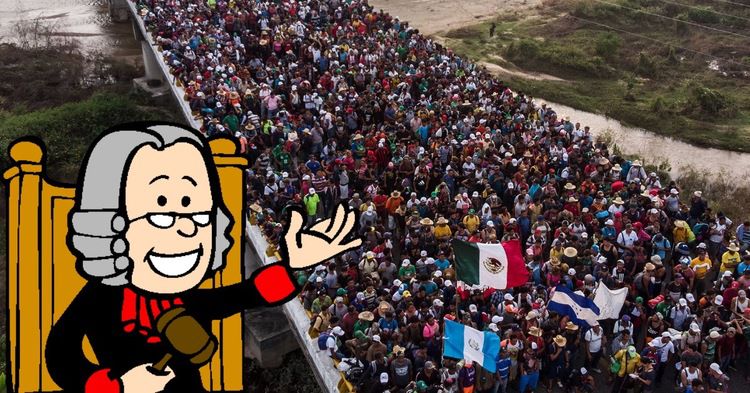 It is illegal to induce an alien to enter or remain in the United States illegally. It has been so for many years under Title 8 United States Code Section 1324, Bringing In or Harboring Certain Aliens. However, a group of Kritarchs have decided to overturn years of precedent and legal usage to declare that the First Amendment protects alien smugglers, corrupt politicians, and those with a personal relationship with an illegal alien to induce and encourage illegal activity. This is not about a debate concerning whether this prohibition should be in Federal law, but a claim that aiding and abetting a crime is not a crime. Note that the analogy of this crime is also contained in Title 18 USC Section 2 Principals and 18 USC Section 3, Accessory After The Fact. Both are long standing statutes that criminalize not speech, but speech involving itself in a criminal offense. (As when an armed robber says “Hands up,” or a blackmailer says “Pay up!” )

The Supreme Court will decide whether a federal law that makes it a crime to “encourage or induce” someone to enter the country illegally violates the First Amendment.

The 9th U.S. Circuit Court of Appeals said the law is unconstitutional in December 2018. The justices added the case to the docket for their forthcoming term Friday.

“The provisions here are primarily directed at conduct, not speech,” the government’s petition to the high court reads. “To the extent they even reach speech, they do so only incidentally by prohibiting communications that foster unlawful activity by particular individuals, which have long been understood to be outside the scope of the First Amendment.”

The dispute involves an immigration consultant called Evelyn Sineneng-Smith. Federal prosecutors allege that she offered to enroll illegal aliens in a Department of Labor certification program for nearly $6,000. She allegedly did so knowing that her clients were not qualified, and were therefore guaranteed rejection.

[The Supreme Court Will Decide Whether Encouraging Illegal Immigration Is Protected Speech, by Kevin Daley, The Daily Caller, October 4, 2019]

The three judge panel on the 9th Circuit who made this ruling are Democrat judges. The law doesn’t seem to be part of their legal reasoning, only imposing their will on the nation, a dictatorship of judges, a kritarchy.

On appeal, a three judge panel of the 9th Circuit said the law is unconstitutionally overbroad because it “criminalizes a substantial amount of protected expression.” Judge A. Wallace Tashima [Clinton appointee] delivered the opinion for the panel, which Judges Marsha Berzon [ditto]and Andrew Hurwitz [Obama appointee] joined. Democratic presidents appointed all three judges.

Interestingly, they brought up what they thought were hypotheticals that would implicate the First Amendment, but had they considered more carefully, they would have thought differently.

The decision cites several examples of protected speech the law endangers: An attorney urging their client to stay in the country to fight a removal order; a speaker addressing the topic of illegal immigration urging unlawful aliens to stay in the U.S. to support direct political action; or “a loving grandmother who urges her grandson to overstay his visa.”

“The foregoing examples are not some parade of fanciful horribles,” the ruling reads. “Instead, they represent real and constitutionally-protected conversations and advice that happen daily. They demonstrate [the law’s] impermissible applications are real and substantial.”

What they thought was a “parade of horribles” was rather a description of established case law that these inattentive kritarchs are unaware of, or just ignored as inconvenient to their support for illegal aliens.

First, an attorney may not aid, abet, encourage, or assist a client to violate the law. The example of an attorney advising a client to “stay to fight a removal order” is a strange example because if there is a final order of removal and there is no case before a Federal court, the attorney’s action would be illegal and has been prosecuted in the past. The low achiever judges should have known that an attorney may advise a client to remain if the process is not over, as a final order of removal is not final until the appeals process is itself over, including that part of the appeal process before the judiciary.

The next example was the worst, it was a family member encouraging another to violate immigration law. This also has been prosecuted. Family membership does not excuse criminal activity. Even allowing an illegal alien to reside in a place is a crime–case law even includes the successful prosecution of a room-mate of an illegal alien for Harboring. All that is required is knowledge or reckless disregard for the fact of the illegal status and any action, including encouragement in furtherance of the crime.

Sadly, the Trump Department of Justice (DOJ) was squeamish in their defense of the law, acceding ground to the alien smuggler and the kritarchs.

The Trump administration counters that only those who attempt to reap a financial gain through illegal immigration are subject to the law. In their view, that component reduces the law’s sweep significantly.

“The crime’s financial-gain element alone eliminates most, if not all, of the 9th Circuit’s concerns,” the government’s petition reads. “That element requires proof that the defendant committed the crime ‘for the purpose of commercial advantage or private financial gain,’ which is not a normal feature of ‘abstract advocacy.’”

“The element would exclude, for example, the 9th Circuit’s hypotheticals about ‘the simple words — spoken to a son, a wife, a parent, a friend, a neighbor, a coworker, a student, a client — ‘I encourage you to stay here,’ as well as a ‘speech addressed to a gathered crowd, or directed at undocumented individuals on social media,’” the petition continues.

This looks like the Trump DOJ is attempting to placate the kritarchs and appeal to the sensitivities of John Roberts, who appears to be cucking on the illegal immigration issue. Well, that might be a tactic, but strategically it could cause much more problems in the future for prosecutions.