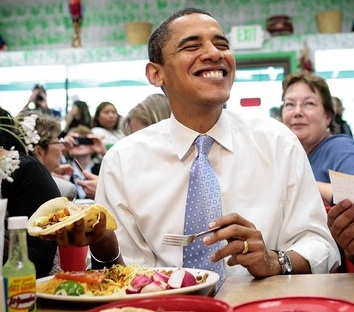 Kansas Secretary of State Kris Kobach appeared on Lou Dobb’s Fox Business show last week, where he explained that President Obama’s amnesty for DREAM kids is not only a wrongful step into the powers of the legislature, but is also a violation of existing federal law. Title 8 Section 1225 disallows so-called discretion for broad groups of illegal aliens.

Other items mentioned in the broadcast segment include the higher number of DREAMy aliens affected (1.4 million according to Pew Hispanic, not the 800,000 cited by Obama) and the fact that DREAMers will go to the top of the line ahead of legal immigrants. (CIS estimates that 4.6 million legal immigrants will be displaced by DREAMers.)

Dobbs also quizzed Kobach about why the Republicans seem to suffer from “a paralysis in the party.” Kobach responded that the framers did not imagine a President who would act outside the law to such a degree, so there aren’t a whole lot of tools, although Congress could cut funds to the implementation activities.

A week ago, President Obama stunned the nation when he announced that he would be implementing the chief provisions of the “DREAM Act” through executive fiat: He has ordered the Department of Homeland Security to refuse to deport illegal aliens under the age of 30 who claim to have entered the country before the age of 16 and who’ve graduated from high school or are in school. Some 1.4 million illegal aliens are likely to qualify for this amnesty.

Most criticism has centered on the fact that the president is enacting a policy that he himself had said could only be achieved by changes in the law. But a bigger problem with Obama’s move has been overlooked: He’s actually ordering federal immigration agents to break the law.

The White House claims that it’s telling Immigration and Customs Enforcement agents to exercise “prosecutorial discretion” in not removing illegal aliens. But there is no such discretion.

Congress enacted these provisions explicitly to force the executive branch to place into removal proceedings virtually every illegal alien encountered by federal immigration agents. The exceptions allowed by the 1996 act are very narrow, to be applied only in extraordinary circumstances (such as aliens seeking political asylum).

In other words, the “prosecutorial discretion” that Obama claims he is ordering ICE agents to exercise no longer exists, because Congress eliminated it in 1996.

* 8 U.S.C. § 1225(a)(1) provides that “an alien present in the United States who has not been admitted . . . shall be deemed for purposes of this chapter an applicant for admission.”

* This triggers 8 U.S.C. § 1225(b)(2)(A), which mandates that if the immigration officer determines that the alien is unlawfully present, the alien must be placed in deportation proceedings: “In the case of an alien who is an applicant for admission, if the examining immigration officer determines that an alien seeking admission is not clearly and beyond a doubt entitled to be admitted, the alien shall be detained for a proceeding under section 1229a of this title.”

* The proceedings described in 8 U.S.C. § 1229a are the deportation (or “removal”) proceedings of the US immigration courts.

Of course, the president long ago showed that he isn’t serious about enforcing our immigration laws. On taking office, he virtually ended work-site enforcement. That and other actions prompted ICE agents to take an unprecedented vote of “no confidence” in the Obama appointee running the agency. Then, in 2010 and 2011, Obama had his Justice Department sue states (like Arizona) that were trying to help the federal government enforce the law.

I wish I could conclude by saying that at least things can’t get any worse. But there are still seven months until January 2013.

Kris W. Kobach is the secretary of state of Kansas. He is also the co-author of the Arizona and Alabama illegal-immigration laws.