On April 2, a Kenyan university was invaded by al Shabaab Somali jihadists who murdered 147 Christian students. If students could correctly recite the Koran, then they would be excused from execution.

Below, Christian students of Garissa University were massacred for the glory of Allah. 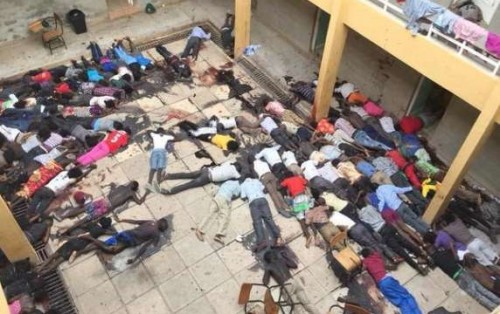 Kenya is 82 percent Christian and just 11 percent Muslim, but neighboring Somalia is almost entirely Islam, and some of its residents believe it is their duty to capture more territory for jihad.

Kenyans still remember the 2013 jihad attack on Nairobi’s Westgate Mall, in which at least 67 persons were murdered by Somali al Shabaab. After that massacre, Kenya began deporting illegal alien Somalis, including those from Nairobi’s Little Mogadishu — a neighborhood which must be similar in cultural attributes to the similarly named area in Minneapolis.

The university is located near the Dabaab refugee camp which holds around 600,000 Somalis, which the Kenyan government believes to be infiltrated by al Shabaab. So Kenya wants it out, and the government also plans on building a proper wall along the 435-mile border with Somalia.

Meanwhile, Washington continues to admit Somalis as refugees and immigrants as if they were the nicest people on earth, instead of threats to national security. Refugee Resettlement Watch notes that the US welcomes 800 Somali Muslims every month. Dozens of Minnesota-residing Somalis have returned home to participate in murdering infidels for the fun of it.

Which leads one to wonder: why is Kenya so much more serious about protecting its national security than America?

Nairobi, Kenya (CNN) Kenyan Deputy President William Ruto on Saturday gave the United Nations’ refugee agency three months to relocate refugees from the Dadaab camp — the world’s largest — to Somalia, or “we shall relocate them ourselves.”

“The way America changed after 9/11 is the way Kenya will change after Garissa,” Ruto said in Nyeri, according to a statement from his office.

Ruto, who is the second highest-ranking person in Kenya’s government behind President Uhuru Kenyatta, said his government has had discussions with United Nations officials about what to do with the camp.

On Saturday, a U.N. High Commissioner for Refugees officer said the agency had not received any formal request from Kenya’s government about moving Dadaab. The U.N. refugee agency manages the Dadaab complex, having set up the first camps there in late 1991 amid Somalia’s civil war.

The agency and the governments of both Kenya and Somalia agreed in 2013 on a process for the repatriation of Somali refugees. But that was supposed to be mutually agreed-upon and voluntary, in accordance with the refugees’ “freely expressed wish and their relevant knowledge of the conditions” where they’d end up, according to the pact.

None of those things, it seems, applies now to the move pushed by Ruto on Saturday. It’s not clear where he expects the refugees to go, other than somewhere into Somalia and out of Kenya.

Any mass move would be a monumental task, disrupting the already difficult lives of more than 600,000 Somalis who call the camp their home. Simply meeting basic needs is a challenge in the vast complex, which has seen devastating droughts, contagious diseases and other travails that have tested its residents and those trying to help.

Still, as tough as conditions there are, they are seen as a better alternative to life back in Somalia, where Al-Shabaab is based and has carried out violent attacks for years.

Yet the Islamist extremist group hasn’t confined its terror to its homeland, as illustrated by the Garissa attack and the 2013 siege of Nairobi’s upscale Westgate Mall, which ended with at least 67 dead.

The Dadaab complex came under government scrutiny after the Westgate Mall attack, too. But just a few weeks later, CNN’s Nima Elbagir managed to go from Somalia to the Dadaab refugee camp undetected by taking one of the panya, or “rat routes,” just like many others have done, Al-Shabaab sympathizers among them.

Such illicit travel along porous borders as well as police officers’ willful ignorance of migrants’ fake IDs, as acknowledged by then-Interior Minister Ole Lemku, illustrates Kenya’s challenge in keeping out threats from Somalia.

That’s why, in addition to moving the Dadaab camp, Kenya is building of a 435-mile (700-kilometer) wall covering most of the Somali border from Mandera to Kiunga — a wall that Ruto says has begun to prevent Al-Shabaab elements from getting into Kenya. The deputy president also vowed that any businesses collaborating with the militant group will be shut down.

These measures are in addition to Kenyan airstrikes on Al-Shabaab camps in Somalia in the days after the Garissa massacre.

“We must secure this country at whatever cost, even if we lose business with Somalia,” Ruto said Saturday. “No politics, no games, no half-measures should apply, as the death of the 147 students must touch all Kenyans.”