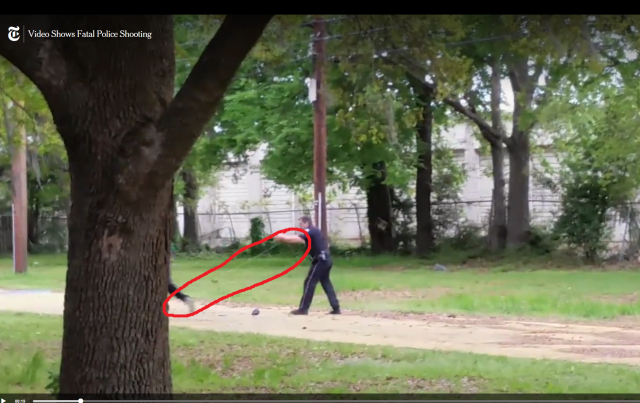 The report I excerpt below was just posted at some time since 12 midnight.The Last Refuge/Conservative Treehouse’s Sundance has published what looks like an incredible sequence of stills and maps of movement from the various videos and witness reports put together by “Treeper” Diwataman, especially the video at the very end by witness Feidin Santana, which appear to show that Walter Scott had seized control of Officer Michael Slager’s Taser, shot him with it, and was dragging the Taser wires embedded in Officer Slager's body, as he ran away. If this is true, Walter Scott was the perp, and Officer Slager was the crime victim, who was fighting for his life.

Will the MSM respond honestly to these new revelations, ignore them, or double down on their story? If the report withstands scrutiny, it means that all charges must be dropped against Officer Slager, and he must get his job back. (What he would really need would be a huge settlement for false termination and false arrest, since his life wouldn’t be worth a plugged nickel anymore in racist North Charleston.)

In the micro-seconds of decision-making, and having chased a fleeing suspect, and having physically struggled for almost two minutes, a scenario emerges where Slager -having lost the advantage of his Taser, and facing the risk of incapacitation from his own Taser being used against him – doesn’t realize (as they stand up – still fighting) the cartridge has dislodged from the trigger assembly.

The Taser wire is clearly still attached to Officer Slager as he draws his firearm to regain control against the risk presented by Scott. The whereabouts of the actual trigger assembly unknown to Slager but in the video you can see it landing behind them.

If you frame by frame the video you will note the wire is still attached to the torso of Slager, and tightening by the fleeing Scott, as Slager fires the first shot.