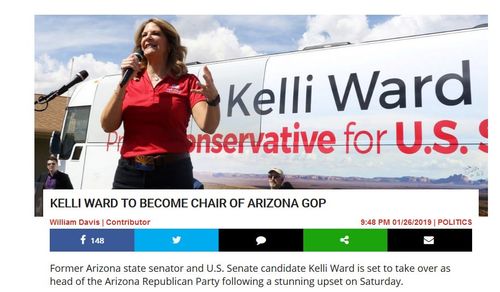 The McCain Era is truly over in Arizona, as populist Kelli Ward has won an upset victory to take over the Republican Party in that state. Kelli Ward has run insurgent campaigns in Arizona for several cycles now, making strong showings but never quite achieving victory. However, with this victory, Trump style nationalists will have a friend in the heart of the state establishment.

Former Arizona state senator and U.S. Senate candidate Kelli Ward is set to take over as head of the Arizona Republican Party following a stunning upset on Saturday.

“I am honored to be your next [Arizona Republican] chairwoman,” Ward tweeted. “As chair, I am committed to working with you all to unify our party & enter 2020 at full strength so we ensure a resounding victory for [President Donald Trump] & Arizona Republicans down ballot. Our state’s future is bright! #Win2020.”

Ward framed her victory specifically as a defense of President Trump. There was also no sign from the Establishment candidate that there would be a denunciation of Ward or a real split in the state party.

The state party has been fractured for years between moderates who embrace business-friendly strategies and prefer to avoid hot-button social issues and a more conservative wing that has embraced the tea party and President Donald Trump's initiatives...

A physician from Lake Havasu City and a former state legislator, Ward had argued that the state party needs an array of changes in the wake of a "crushing defeat" in the November general election that saw the loss of the Senate race and defeats in several other congressional and statewide races despite a voter holding a registration edge over Democrats.

"We simply can't afford to let this happen ... we need to do better," Ward told the party gathering Saturday, adding later: "We have to win 2020 for President Trump."

Lines, in his unsuccessful pitch to hundreds of party activists for a second term in the party's top leadership post, appealed for unity and said the party must avoid division that hampers its competitiveness.

"There is so much more that unites us than divides us," said Lines, a Yuma businessman. "No one here today is my enemy."

Of course, Meghan McCain continued the family tradition of attacking the conservative grassroots. "It's a great day for Az Democrats" she tweeted. [Meghan McCain tweets on Arizona GOP vote, talks Coulter on ‘This Week’, KTAR, January 27, 2019]

But then, she exists to serve as a mascot for the leftist media. She recently attacked the GOP and President Trump to win the approval of anti-American, anti-white extremists Van Jones. [Meghan McCain: Trump changed the GOP and it scares me, The Van Jones Show, January 27, 2019] if she is horrified by Dr. Ward, this is probably a good thing for Arizona, and for America.