Blogger Mickey Kaus checks out what the open-borders gang is thinking about their recent wipe-out. The DREAM Act was supposed to be an easy win, and was left until the Lame Duck when the Democrats’ remaining shards of power remained. The Great Obama had promised to amnesty millions of hopeful illegal foreigners in his first year with the help of huge Democrat majorities, but somehow he forgot, and rewarding lawbreakers similarly slipped his mind in most of the second year of his administration.

Some of the DREAMer individuals with whom Kaus spoke sounded ready to go for “enforcement first” as a way to reach their stated goal, the legalization of tens of millions. (That’s why the phrase “enforcement first” should alarm and alert any defender of America. “Enforcement only” is the way to go, period.) 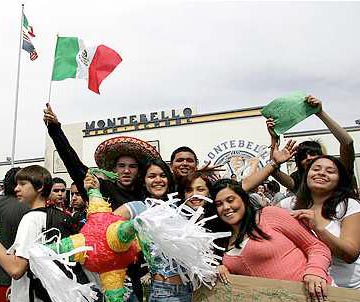 Somehow they neglected to mention the other goal, that of “increased flow” to maintain the Hispanization of the United States. It’s normal for some assimilation to occur over several generations and the Raza gang wants to prevent that.

Hispanic supremacist and broadcaster Jorge Ramos voiced the hopes of many: “Latinos are not only the largest minority right now, but eventually we will be the majority in the United States, and the process is well underway.”

So it’s doubtful that hardcore reconquista Mexicans have given up on their revanchist fantasies and accepted assimilation to American values and language. It’s only a strategy, as Kaus notes. Beware of Raza gangsters who sound reasonable, in other words.

In the wake of the defeat of the DREAM Act—long considered the immigrant legalization bill that would be easiest to pass—the once-confident “immigration reform” movement has entered an introspective, questioning phase. Activists are openly asking how their leaders, such as Rep. Luis Gutierrez, could have so misjudged the public mood as to lead them to near-total defeat. Many are even saying what was heretofore unthinkable: that it was arrogant for people who came into the country illegally, however appealing they are as individuals, to let themselves be seen as demanding legalization before their host citizenry was assured that the border would be secure against future illegal entry. These new voices increasingly argue that the fastest way to actually achieve legalization is to steal a page from their opponents and pursue a two-stage strategy: secure the border first, and only push for what the opponents call “amnesty” once anxieties about further waves of undocumented workers have been calmed.

“We tried to take a shortcut. It’s blocked,” one disappointed advocate said privately. “If we have to take the long way around, so be it.” In pursuit of this new approach, he and others plan to support, with varying degrees of enthusiasm, many of the “enforcement” ideas expected to be proposed by Republican lawmakers in the House— including a requirement that employers use E-Verify, an automated system, to check the immigration status of new hires.

Officials within the Obama administration are encouraging this approach, which they call “practical.” They say the president has come to realize that “enforcement first” gives him another opportunity to make common cause with Republicans without sacrificing his ultimate goal, which remains legalization. “It’s win-win-win,” one White House aide said on condition of anonymity because he is not authorized to speak on the subject. “We put points on the board, the Republicans solve their Latino problem, and the immigrants eventually get to be legal.”

The aide noted that the new approach would have been adopted yers ago, but a many Latino activists were unwilling to take any steps—like mandating E-Verify or building a border fence—that might cut off a continuing movement of undocumented Spanish-speaking immigrants from Mexico and Central America, and also cut off those already here from their homelands. “It was a nationalistic thing, a family thing, an ethnic thing, a political power thing. You know, “Venceremos!”” admitted one activist who had resisted the new approach. “But now we are thinking more realistically. We need legalization and this is the fastest way.” He expects the movement’s new thinking …

Oh wait. Sorry. None of this is happening at all. I must have drifted off.

Update:: But this stemwinding Newtadorian blogger is onto the basic idea. …