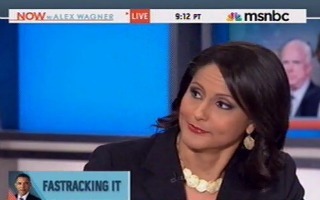 Karen Finney And The Limits Of Affirmative Action

Pictured right is Karen Finney, whose bio describes her as the "first African American spokeswoman for the Democratic National Committee."

Editing Alexander Hart's piece last night, I was trying to find out who the female host was in the video with Jonathon Capehart and Touré.

I assume Ms. Finney has a reasonable amount of talent for journalism or politics, but it's also obvious that her career is the better for her almost invisible affirmative action qualification:

Karen Finney takes her heritage quite seriously—she was criticized for ranting about “crazy crackers on the right” who use “hateful language”.

The justification for affirmative action is supposed to be the legacy of racism. The reason it's still deemed necessary is that many blacks, in a phrase that got Al Campanis fired, "may not have some of the necessities" to handle intellectual tasks as well as whites, and therefore need a leg up.

If this recognized "test score gap", whether in college applications or firemen's civil service tests is due to heredity, it's obvious that Karen Finney has almost no African heredity at all. She may be a Mayflower descendent.

If, on the other hand, it has absolutely nothing to do with heredity, but is only due to prejudice against people's color, well, again I don't see where Ms. Finney qualifies.

And there are a lot of people like her in positions of serious power. Valerie Jarrett, Senior Advisor to the President of the United States, looks like Mary Tyler Moore after one day of tanning at the beach. To the extent that any of these people have experienced  prejudice, it's always been in their favor.