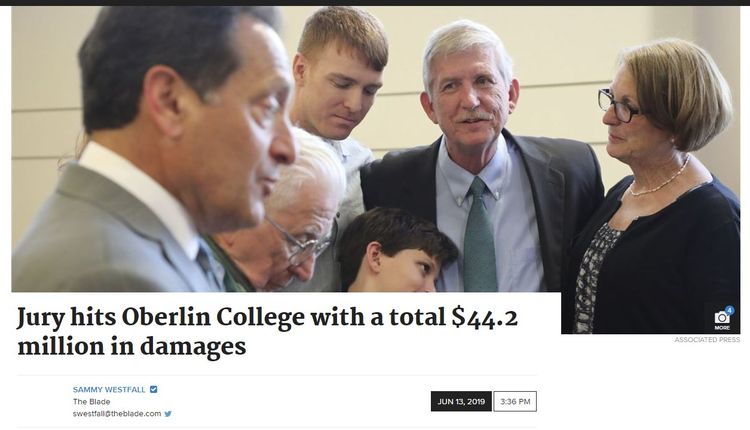 On top of the $11 million in compensatory damages awarded earlier, a jury today piled on triple punitive damages. From the Toledo Blade:

Jury hits Oberlin College with a total of $44.2 million in damages

ELYRIA, Ohio — The city of Oberlin is quiet this time of year – with its population of 6,800 seeing ebbs and flows in tune with the Oberlin College school year.

But even mid-summer, the nation has been feeling reverberations from the small city, now home to a landmark legal case that awarded family-run Gibson’s Bakery a total of $44.2 million – comprising punitive damages set at $33.2 million on top of the existing $11 million compensatory award — against Oberlin College on Thursday. The jury also awarded an undetermined amount in attorney’s fees. …

The lawsuit stems from an incident on Nov. 9, 2016 in which a black Oberlin student was accused of attempting to shoplift wine from Gibson’s. Suspecting the student of shoplifting, an employee and grandson of the store’s owner, who is white, followed the student out, leading to a physical altercation in front of the store.

Protests erupted on campus in the days following the incident, with students claiming that the robbery charge and subsequent conflict were racially motivated, as well as claiming a history of racial profiling in the store.

The students originally claimed their arrests were racially motivated but later backtracked on those claims and pleaded guilty to misdemeanors in court. …

The jury found the college and its dean of students guilty for libel of both David and Allyn Gibson, as well as their bakery. The jury found only the college guilty of inflicting emotional distress on both Gibson’s and only Ms. Raimondo responsible for tortious interference of business relationships. …

Gibson attorneys on Wednesday underscored that punitive damages are meant to discourage not only Oberlin, but any other institution from committing similar acts. …

When Judge John Milarldi instructed the jury, he reminded them that they did not need to assess any punitive damages against the defendants, but could only do so if the plaintiffs met the burden to prove by “clear and convincing evidence” that Oberlin acted with “actual malice” – defined as a state of mind characterized by “hatred, ill will, or spirit of revenge” or a conscious disregard of the rights and safety of others that has a great probability of causing substantial harm. Actual malice can also be proof that Oberlin “knowingly authorized, participated in, or ratified the actions or omissions of an employee that demonstrated malice.”

In March 2013, I wrote about an earlier hysterical hate hoax at Oberlin in which the sight of a woman wearing a white blanket against the late winter cold was hyped up into a KKK assault on the campus of the (very) liberal arts college:

KKK Is the New UFO