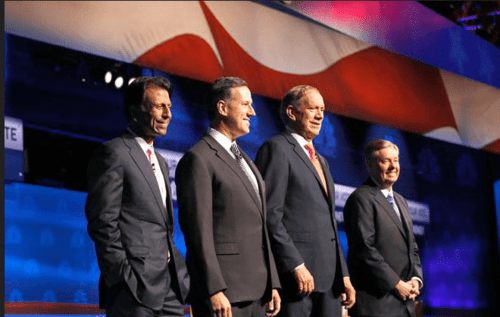 Junior Varsity Debate—Graham and Santorum on Immigration and Labor

On October 28th, 2015, there was the main GOP debate, and before that the "Junior Varsity", or "Undercard"debate was held.

As last time, the Jr. Varsity debate was composed of Pataki, Graham, Jindal and Santorum.   You can see the debate's transcript here, it's a lot less time-consuming than watching it.

Immigration was discussed.  Senator Lindsey Graham, a fanatical amnesty-booster, made it clear where he stands, not that we needed any clarification:

I want to fix a broken visa system. I want to increase legal immigration, because we're gonna have a shortage of workers over time.    As to the 11 million, I want to talk about fixing the problem. We're not going to deport 11 million people and their legal citizen children.  But we will deport felons. And those who stay will have to learn our language to stay, because I don't speak it well but look how far I've come.

Senator Santorum, I'd like to go to you. You have talked an awful lot about how you want to protect American jobs by eliminating the number of immigrants who come into this country.  But very recently, the CEO of Toll Brothers (ph) told that he can't get by without immigrants because they make up more than half of his workforce at this point. We're not talking about people who are making minimum wage but he can't find Americans who want to do these jobs for $20-an-hour-plus jobs.  What would happen if your plans are successful?  What happens and how would we fill that hole in the economy, that gap that's created?

So how did Santorum respond?

Well, as you know, Becky, we have the lowest labor participation rate in 50 years and we also have the slowest growth in wages in the history of our country, any 20-year period. In fact, the last quarter had the lowest wage growth ever recorded.

And so you look at the fact that we've brought in 35 million — 35 million legal and illegal immigrants over the last 20 years, more than any period in American history, we have low wages, low participation waits.

Good point, keep bringing that up.   Then Santorum started to stammer a little before getting it together.   Hey, it happens.

We don't — we aren't giving the training and the investment in our workers and we're bringing in people to compete against low wage workers. That's what's happening.

This next part is good.

We are — we have an immigration policy that Senator Graham supported that brings in even more low wage workers into this country. He says he wants to solve problems, that's great. But you're not solving problems for American wage earners. You're not solving problems for workers in America who have seen their wages flat line and have been disaffected enough to leave the workplace.

We need to get better training and better skills, including vocational education and — and training in this — in those — and — and cut — community colleges. But the bottom line is, we have to make sure that we are not flooding this country with competition for low wage workers.

By this time, Becky Quick was cutting Santorum off.  The candidate made some good points. But how about also pointing out that mechanization and robotics are eliminating jobs, and we may struggle in the future to have enough jobs for the people we have already.  Why doesn't any candidate point that out?

Anyway, kudos to Santorum for defending the American worker and relating his plight to immigration.