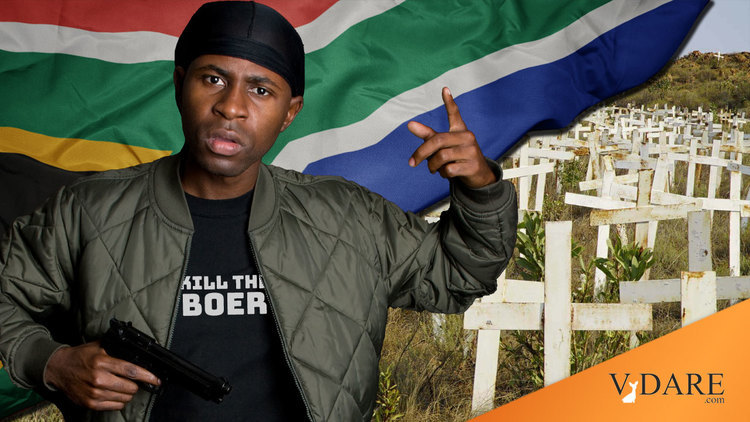 Last month: South Africa Farm Attacks In June: Three Dead, One Robber A Cop. Coming (Plus These New Riots) To An America Near You?

A number of white farmers were beaten, stabbed, kidnapped, held prisoner and shot during ongoing farm attacks in July. One was murdered.

The victim was discovered by another employee. Reports say Oosthuizen was found with multiple stab wounds.

The attackers ransacked the house after assaulting the couple. The husband suffered severe head wounds and his wife was bound and kidnapped.

The thieves stole numerous household items and loaded ten sheep into a vehicle. After they unloaded the stolen property at a different location, the abducted wife was driven to an ATM where she was forced to withdraw cash. She was abandoned and able to drive herself back home.

Meanwhile, her husband contacted authorities, resulting in the recovery of the stolen property, including the livestock. One suspect was captured.

A planned attack in the Free State province was foiled after police were tipped off. Police intercepted the suspects’ vehicle arresting four males and one female. In addition to illegal firearms, fake police identification cards were discovered.

Intruders breached an electric fence and killed the farm’s watch dog with poison, but beams detected the invaders’ movements, triggering an alarm. The assailants fled.

Having been shot in the leg, thigh, and hip, the man was held captive along with his wife for about three hours as intruders ransacked their home. Thieves made off with jewelry, electronic equipment, laptops, a television set, and cell phones. The victim was admitted to the hospital’s intensive care unit.

Reports say Catherine Cairns, founder of the PoloAfrica Trust for teaching young Africans polo, was caught off guard when four armed males confronted her inside her home. The victim was assaulted and bound with shoelaces and left in a bedroom while the invaders ransacked the house.

Having freed herself, she escaped through the window and contacted neighbors. The attackers reportedly stole the woman’s cellphones, a laptop, liquor, jewelry, and a small truck.

A group of intruders walked into the home and demanded firearms and cash. The attackers fled the scene with firearms and other items. Recovered near the house were a laptop, camera, ammunition, a 9mm magazine and a few other smaller items near the house, the report said.

The intruders had entered her home and were attempting to break through the door. Reports say the woman was awakened by barking dogs, heard the intruders inside her home, and contacted authorities.

The attack occurred near Reivilo in North West Province. The farmer was bound and cash stolen. The cash was later recovered.

The incident occurred July 11, 2021. The suspect appeared before the Taung Magistrates’ Court for his first court appearance on July 13, 2021.

Reports say Steyn was attacked as he returned to his home. The assailants ransacked his home, making off with a phone, electrical equipment and a safe containing firearms. The attackers fled in Steyn's small truck which was later recovered.

The report says the attackers first accosted a person staying at a cottage on the property then attacked the couple who owned the property in their home. The victims were bound as the intruders ransacked the house and helped themselves to food. Items stolen included a small truck.

The couple were hospitalized after the ordeal.

They stole cash from a couple who apparently lived there.

Reports say authorities were notified by two farm employees. The firearm he was shot with is referred to as “small caliber.” First aid teams and emergency services were called.

Khun was beaten and bound and his dogs poisoned. The attackers ransacked the farm house for over two hours. They fled with household items, firearms and ammunition. Khun was eventually able to free himself and contact his father who lived in a separate house on the same farm.