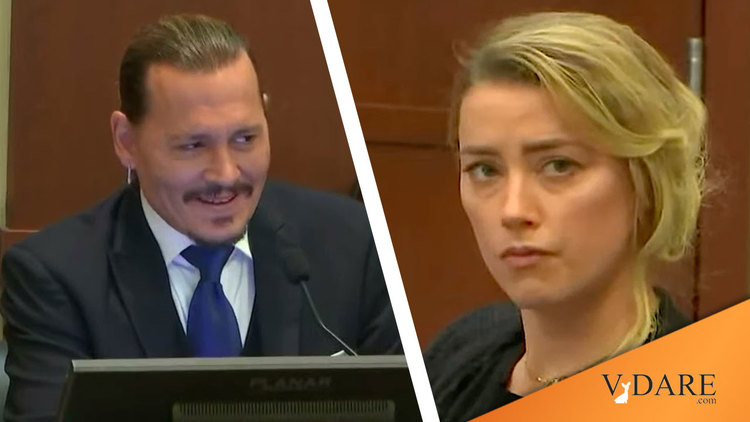 Johnny Depp Is Defeating His Ex-Wife Amber Heard In The Court Of Public Opinion And That's Just WRONG Because Ms. Heard Is A Woman

The Depp expends. I don't know about you, but I take comfort in that, knowin' he's out there. The Depp. Wastin' his money for all us consumers. pic.twitter.com/mxOIYf5jZJ

So, washed-up superstar Johnny “Pirates of the Caribbean” Depp is suing his ex-wife, blonde starlet/adventuress Amber Heard, for $50 million in a defamation case (and Heard is counter-suing Depp for $100 million) for allowing to be published under her name a Washington Post op-ed implying Depp was guilty of “sexual violence”:

Amber Heard: I spoke up against sexual violence — and faced our culture’s wrath. That has to change.

Heard’s op-ed was actually written by four ACLU lawyers after she had promised to donate half of her seven million dollar divorce settlement from Depp to the once-respected NGO.

Depp’s legal burden of proof is fairly high, so he may well not win money, but he seems to be winning in the court of public opinion. Over the course of this televised trial, public sentiment has increasingly favored Depp as the evidence unfolded. Nobody these days much wants to pay for a movie ticket to see the hard-drinking has-been anymore, but in a long, quirky career he did put on a number of memorable roles, both conventional (Donnie Brasco) and out-of-the-blue (Edward Scissorhands, and Ed Wood). On the Conventional But Consistent vs. Erratic But Quirky dimension of leading man-dom, with Tom Cruise at one pole and Brad Pitt in the middle, Depp was at the Quirky pole.

The culmination of Depp’s career was in Captain Jack Sparrow, in which he played a pirate as a 1970s rock star, the perfect role for the high cheekboned Depp, who went to Hollywood in 1983 to be a 1970s rock star.

In contrast, Ms. Heard’s movie career has never caught on with audiences, although she’s often been cast in promising roles. It’s almost as if she’s a better actress in private than in public. Or perhaps her career has suffered from the 21st century’s push for You Go Girl feminism, which has pretty much wiped out the femme fatale roles that, judging by her well-publicized private life, she might have been born to play.

That the part of the public that is following this case (probably heavily female or gay) is not mindlessly rooting for Amber Heard as a member of Team Women like they are supposed to, but is instead listening carefully and deciding between two individuals, is driving the gatekeepers nuts. From the New York Times opinion page:

The Humiliation of Amber Heard Is Both Modern and Medieval
May 20, 2022

Ms. Bennett is a contributing editor in Opinion who writes on gender, politics and culture.

…The trope of the scorned woman who takes revenge goes back much further than “Fatal Attraction,” of course — Dido cursing the Trojans as she killed herself, Medea’s awful revenge on her unfaithful husband. And indeed, this trial could function as a case study in contrived stereotypes used to discredit women, even if you believe there is some truth behind Mr. Depp’s claims.

Ms. Heard has been portrayed as mentally unstable, hysterical, a gold digger, a temptress who brought home other paramours at all hours of the night, a freeloader who moved her friends into Mr. Depp’s many houses, an attention-seeker with an unquenchable need for drama and of course an untrustworthy liar — textbook undermining strategies, each with its own sexist implications.

… Somehow, Ms. Heard seems to have become a stand-in for every evil, lying woman getting her comeuppance — alpha queen bees in high school, the girl who slept with your boyfriend or girlfriend, every manipulative ex. She is Eve, she is Medusa, she is Lady Macbeth. She evokes vamps and vampires, wicked stepmothers, witches.

Maybe she’s just not a good actress in front of the camera, but this kind of inner nature sounds like it should have led to a better movie career. What kind of role could James M. Cain, Billy Wilder, or Raymond Chandler have written for a woman like her? But the long Double Indemnity–Body Heat era of great roles for actresses as manipulative monsters is over because those roles are tropes.

Amber Heard is just the first target of a new extremist playbook.

… The work of those bots has been further amplified by “men’s rights activists” — the part of the far-right-leaning extremist “manosphere” that seems to have decided discrediting Amber Heard is the key to destroying every woman who accuses men of abuse or domestic violence.

Trial memes — almost universally weighted against Heard — have taken over every corner of the internet, from TikTok to Twitch to Etsy.

Even Saturday Night Live has lampooned what have been portrayed as the many excesses and absurdities of the trial testimony, and social media users have similarly found the trial ripe for parody.

How dare Saturday Night Live go for laughs instead of edification? What is the Current Year, 1991?

On TikTok, for example, totally unrelated accounts seem to have given themselves over to full-time Depp-Heard trial mockery, to the point where the actual substance of the testimony seems completely irrelevant beside the need to mine the proceedings for entertainment.

I want to see Amber Heard go all–Joe Pesci and ask: “Do I entertain you?” And America’s answer would be: Not when we had to pay to see you in the movie theater, but this free stuff is great!

…Most of the reporting on these memes has placed the blame for their sensationalist tone squarely on the evolution of fandom content creation. But recall that the white supremacist alt-right movement has a long history of memeifying everything they want to normalize and legitimize, and keep in the forefront of your mind that the alt-right latched onto this case as its bulwark long before fandom and the internet at large did. By now, after years of political disinformation campaigns, we’re used to social media’s natural ability to contort reality. Rarely, however, has it bent this far, this rapidly, for this many people, in service of something this vile.

In contrast, recall the superbly responsible job the mainstream media has done over the last two years in reporting on the Mostly Peaceful Protests and Racial Reckoning at a cost in incremental dead bodies of not that far into five figures and counting.

… What we’re witnessing here are the dramatically compounded effects of internet researcher Alice Marwick’s theory of morally motivated networked harassment, which holds that a group of social media users can justify any amount of abuse directed at a target if they feel their cause is morally right.

This is, of course, totally different from what happened to all those Karens, like the Central Park Karen (did she ever get another job?), who deserved everything they had coming to them. You see, Amber Heard is on the Good Team, not the Bad Team.

How do we know? We can just tell.

… The Depp-Heard trial has refined the Gamergate playbook in a way that will haunt us for years to come. It has proven to extremists that if you rally around the right beloved public figure or institution, blanket them in a protective sphere of outrage and misinformation, and weaponize fandom culture — already so prone to ideological radicalization and irrational groupthink — you can successfully push whatever media narrative you want into the mainstream.

In contrast to the prestige press, which only picks out carefully vetted heroes to promote, like George Floyd.