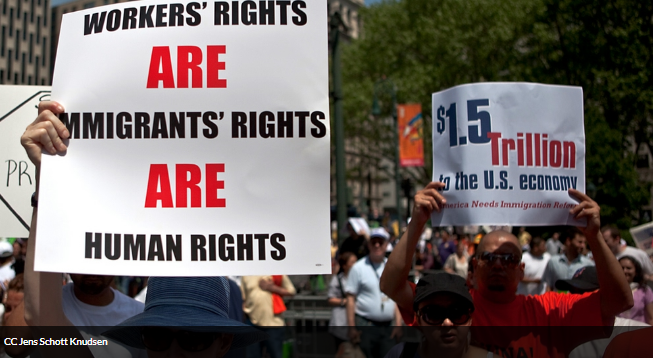 The New York Times has a story about US Catholic Bishops and Amnesty:

WASHINGTON — Catholic bishops and priests from major dioceses across the country will preach a coordinated message next month backing changes in immigration policy, with some using Sunday Masses on Sept. 8 to urge Congressional passage of a legislative overhaul that includes a path to citizenship for unauthorized immigrants.

The decision to embrace political action from the pulpit is part of a broader effort by the Roman Catholic Church and other faith groups that support President Obama’s call for new immigration laws. It includes advertising and phone calls directed at 60 Catholic Republican lawmakers and “prayerful marches” in Congressional districts where the issue has become a divisive topic. [More]

I remember when the New York Times editorialized that activism by Catholic bishops on abortion should end what they called “the truce of tolerance” towards American Catholics, but when Bishops tackle immigration, it’s different.

It’s important for Catholics to remember that the Bishops are speaking politically, not doctrinally.  You can still be a good Catholic and vote  against amnesty.

John Zmirak, who’s written several articles for us,  wrote  an article on this  in an online Catholic publication called  Aleteia, in which he writes:

A number of prominent Catholics have tried hard to create the impression that there is a Catholic “position” or even a teaching on the right number of immigrants the United States ought to admit, and what kind of public benefits such immigrants should be offered.  In the U.S. context, this imaginary Catholic doctrine is invariably presented as coinciding with the policies favored by the left wing of the Democratic party – just as throughout the 1980s, the U.S. bishops produced one policy statement after another endorsing larger government, higher welfare payments, more regulation of business, and the decrease of U.S. defense spending.

None of the bishops’ quixotic policies were implemented, but their statements did accomplish something: they gave political cover to putatively Catholic politicians like Mario Cuomo, Edward Kennedy, Geraldine Ferraro, and (later) Nancy Pelosi. How many hundreds of times have pro-lifers who criticized someone like Pelosi heard the claim, “Well, I may differ with the Church on just one narrow issue – women’s reproductive health care choice. But you Republicans dissent from the Church on poverty, peace, health care, and social justice. We’re truer Catholics than you.”[How Catholics Should Think about Immigration, It’s time to stop the name-calling and argue rationally about the common good, John Zmirak, February 7, 2013]