Robert Spencer of JihadWatch.org appeared on his semi-regular segment on Canada’s SunTV to discuss the week’s happenings in the world of hostile Islam. Egypt was the headline item naturally, with a discussion of the worsening attacks upon Coptic Christians.

In addition, Spencer noted Thursday’s walk-about rally in Washington DC where Egyptian Christians and friends protested the Muslim Brotherhood bias of the White House, the Council on American Islamic Relations, CNN and the Washington Post.

It is curious that liberal stalwarts like the Post support Muslim culture, which is founded upon anti-woman, anti-gay, anti-freedom sharia law. The paper should have noticed by now that not all diversity is equal.

Below, pro-Christian demonstrators visited the office of the Washington Post, which locked its doors in fear of free speech. 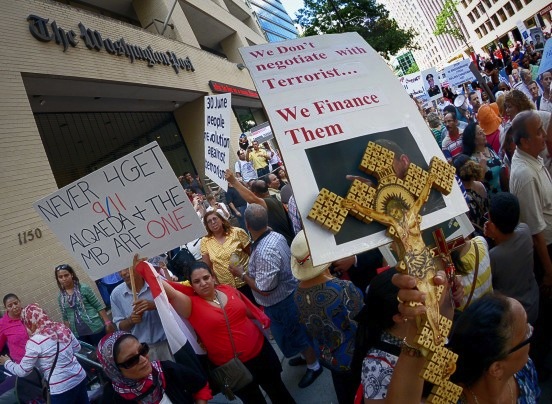 The Washington Free Beacon covered the event more actively than the Post:

A group of Egyptians protested in front of the White House Thursday afternoon to “expose” what they say is “the clear bias of the Obama administration and the American media in support of the Muslim Brotherhood and its terrorist ideology.”

Hundreds of Egyptians, who travelled to Washington, D.C. from around the United States, gathered in front of the White House before marching to the offices of the Washington Post, news network CNN, and the Council on American Islamic Relations (CAIR), a Muslim advocacy group that protestors called the Brotherhood’s “embassy.”

Protest organizers called on “all Egyptians” living in the U.S. to join their march, which took place as violence in Egypt continues to rage between the Muslim Brotherhood and secular military forces.

The marchers’ final stop was the Egyptian military attaché’s D.C. office, where the activists chanted their support for “the Egyptian army for its heroic stand against [Muslim Brotherhood] terrorism.”

Many of those who participated in the march are Coptic Christians, a religious group that has been systematically targeted with violence by pro-Brotherhood protestors, some of whom have been desecrating and sieging churches in Egypt.

The protestors gathered on the curb outside of the White House lofting signs that read, “We support the Egyptian Army,” and “The Muslim Brotherhood never renounced terrorism.”
?
“You can burn down our churches but you can never touch our faith,” read another sign.

“I love this sign,” said one passerby who saw the sign referring to the churches. “I believe it too.”

Many Egyptian churches have been burned and vandalized in recent weeks as Muslim Brotherhood-backed protestors swarm the streets. Dozens have been killed during the riots.

“Although the Muslim Brotherhood has spent the last month destroying churches homes, and businesses, and torturing and killing both its civilian and military opponents, the Obama administration continues to insist that it be ‘included in the process’ of forming a new Egyptian government,” an advocacy group called the Institute on Religion and Democracy said in a statement of solidarity issued to reporters at the march.

The protestors, who were bussed into D.C. from their churches, maintain that the Obama administration has not done enough to protect Christians in Egypt from the Muslim Brotherhood.
“Obama, he’s helping them,” said Mossed.

The protest drew interest from tourists and other passersby. At one point, several Segway riders paused to snap pictures of the protestors.

Protestors said they were particularly upset with the way the American media has written about and portrayed the events in Egypt.

“The Washington Post, they don’t give a voice to the people and tell the truth,” Mossed said. “They have to show all the truth and not just hide it like Al Jazeera.”

Another protest leader could he heard yelling about the Post, claiming that it is just “like Al Jazeera.”

The demonstrations come two weeks after a group of pro-Muslim Brotherhood activists held their own rally outside of the White House to protest what they say is the Egyptian military’s “coup.”

Egypt analysts said the march reflects frustration with the Obama administration, which has been cautious in the weeks since Mohamed Morsi was deposed.

“This particular march reflects the extent to which Egyptians are frustrated what they view as a less-than-enthusiastic response from Washington after Egyptians marched by the millions to topple a theocratic party from power,” said Eric Trager, an Egypt expert at the Washington Institute for Near East Policy (WINEP).

“Of course, from Washington’s perspective, the devil is in the details: Morsi was, in fact, toppled by an inherently undemocratic military coup,” said Trager.

Christian supporters of Israel have also expressed worry at the situation in Egypt.

“This is a modern pogrom. The silence must end. The United States must lead,” Christians United for Israel executive director David Brog said in a statement.

“We must make it clear to the Egyptian government, the Muslim Brotherhood and the world that we will not ignore this tragedy.”

Spokesmen for the White House did not respond to a request for comment on the march.

The Washington Post’s lobby was reportedly put on lockdown as a result of the march, which attracted scores of protesters.

“The lobby was closed for a very short time for safety,” Washington Post spokeswoman Kristine Coratti told the Free Beacon.

Coratti pushed back against the protestors’ criticism of the Post‘s Egypt coverage.

“Our coverage of events in Egypt has been comprehensive, incorporating all perspectives, and it has been fair, accurate, and honest,” she said.