John Perazzo In FRONTPAGEMAG: Baltimore's Problem Is "Democrats." But Why No Seattle Riots? 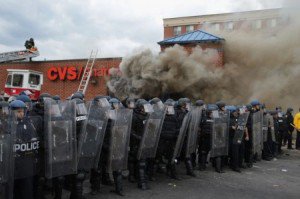 Like most members of Conservatism, Inc., John Perazzo thinks he knows what the problem is in  Baltimore. So he fingers the culprits behind the anarchy in Front Page magazine. It’s the Democrats, of course:

In the 1950s and early ’60s, Baltimore was the home of many thriving industries—particularly manufacturing and shipping—that created some three-fourths of all the jobs held by people in its metropolitan region. The city at that time had nearly a million residents, 23% of whom were black, and the median family income was 7% higher than the national average.

In 1967, however, this prosperity began to vanish when Baltimore’s city government was taken over by a string of Democratic mayors who have continuously held power ever since, and have turned much of the city into a grim wasteland.

William Donald Schaefer, who served as mayor from 1971-87, set the stage for Baltimore’s economic decline by championing an ever-expanding public sector, extensive government regulation of private business, and heavy reliance on federal grants and city bonds to finance a host of development projects throughout Baltimore. As the City Journal reports: “When those monies proved insufficient,” Schaefer “created his own city bank to seed development: the Loan and Guarantee Fund,” which “financed itself by selling city property and then leasing it back to itself, and by selling bonds that would stick future taxpayers with much of the bill.”

In 1987 Schaefer was succeeded by Baltimore’s first elected black mayor, Kurt Schmoke, who, during his 12 years in office, continued his white predecessor’s policy of extracting as much taxpayer money as possible from Annapolis and Washington. By 2001, such state and federal subsidies accounted for 40% of Baltimore’s operating budget.

Schmoke was a close friend of President Bill Clinton and had connections to a number of Clinton administration officials—most notably the disgraced Henry Cisneros and Andrew Cuomo, both heads of the Department of Housing & Urban Development—ensuring that Baltimore’s city programs would continue to receive high levels of federal support. One such initiative—bankrolled by a ten-year, $100 million federal grant—was theestablishment of an Empowerment Zone (EZ) whose goal was to transform“distressed” areas of the city into “neighborhoods of choice” by implementing a host of job-training, workforce-development, home-construction, and drug-treatment programs. All told, Baltimore’s EZ coverednearly 10% of the city’s total area. It was precisely the type of endeavor that President One-Note loves. The results, however, were pitiful. By 2002:

All this might be true, but there’s one big problem with Perazzo’s theory. Democrat control began in 1947. Only one Republican has been mayor since then, from 1963-1967, and it's the same man who was mayor from 1943-1947, Theodore McKeldin.

Granted, liberal-Democrat policies from 1967 onward might have helped send Baltimore into economic decline. And perhaps the Democrats who ran the city for most of the 20th century before 1967 weren’t so liberal. But blaming the riots on liberal Democratic policies is the classic logical fallacy: post hoc ergo propter hoc.

Seattle's political culture is very liberal and progressive for the United States, with over 80% of the population voting for the Democratic Party. All precincts in Seattle voted for Democratic Party candidate Barack Obama in the 2012 presidential election.[196] In partisan elections for the Washington State Legislature and United States Congress, nearly all elections are won by Democrats. Seattle is considered the first major American city to elect a female mayor, Bertha Knight Landes.[197] It has also elected an openly gay mayor, Ed Murray,[198] and a socialist councillor, Kshama Sawant.[199]

Seattle is widely considered one of the most liberal cities in the United States, even surpassing its neighbor, Portland, Oregon.[200] Support for issues such as same-sex marriage and reproductive rights are largely taken for granted in local politics. In the 2012 U.S. general election, an overwhelming majority of Seattleites voted to approve Referendum 74 and legalize gay marriage in Washington state.[201] In the same election, an overwhelming majority of Seattleites also voted to approve the legalization of the recreational use of cannabis in the state.[202] Like much of the Pacific Northwest (which has the lowest rate of church attendance in the United States and consistently reports the highest percentage of atheism[203][204]), church attendance, religious belief, and political influence of religious leaders are much lower than in other parts of America.[205]

Seattle also has a thriving alternative press, with the Web-based daily Seattle Post-Intelligencer, several other online dailies (including Publicola and Crosscut), The Stranger(an alternative, left-leaning weekly), Seattle Weekly, and a number of issue-focused publications, including the nation's two largest online environmental magazines,Worldchanging and Grist.org.

In July 2012, Seattle became the largest city in Washington state to ban plastic shopping bags.[206] In June 2014 the city passed a local ordinance to increase the minimum wageto $15 an hour on a staged basis from 2015 to 2021. When fully implemented the $15 hourly rate will be the highest minimum wage in the nation.[207] In October 2014, Seattle officially replaced Columbus Day with Indigenous Peoples' Day, honoring Seattle's Native American community.

So politically, Seattle is just like Charm City, and might be even more ardently leftist on the social issues. Yet other than the brief lapse into chaos during the Occupy protests (which spanned across the country) it seems strangely immune to the criminal insanity in such places as Baltimore and Detroit.

Seattle is also “predominantly white,” at about 70 percent of the population, with Asians at 14 percent. Whites also run the city. Baltimore is, again, about 65 percent black and only about 30 percent white. Blacks run Baltimore.

If liberal Democrats are the problem in Baltimore, as Perazzo and others in Conservatism, Inc., suggest, why aren’t other cities under their control plunging into violent chaos?