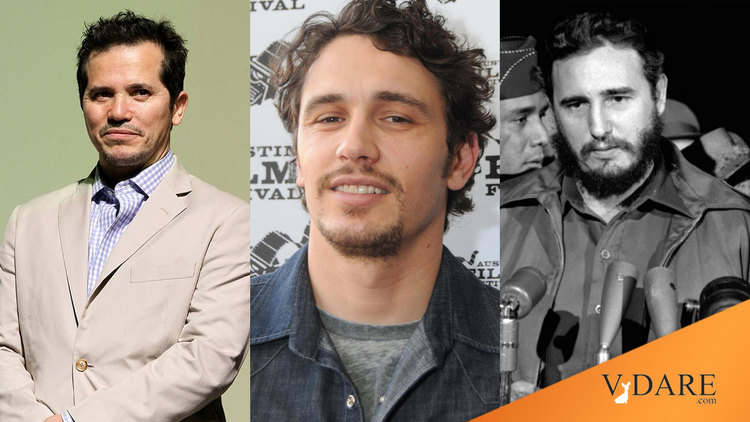 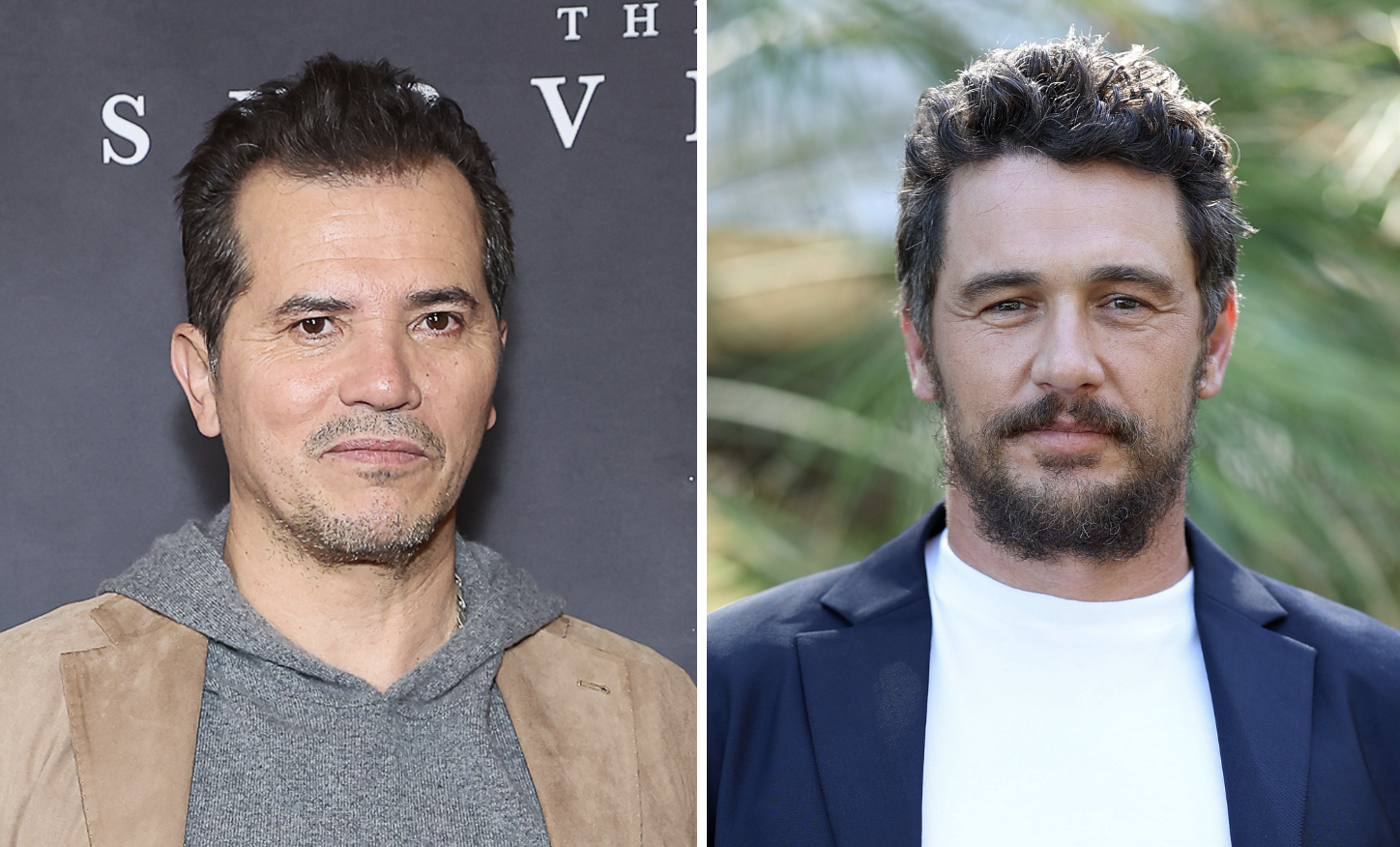 John Leguizamo Slams James Franco’s Casting as Fidel Castro: ‘He Ain’t Latino! How Is This Still Going On?’

John Leguizamo took to Instagram to speak out against the recent casting of James Franco as Cuban revolutionary Fidel Castro in the upcoming independent film, “Alina of Cuba.” …

“How is this still going on?” Leguizamo asked his Instagram followers about Franco being cast as the Cuban historical figure. “How is Hollywood excluding us but stealing our narratives as well? No more appropriation Hollywood and streamers! Boycott! This F’d up! Plus seriously difficult story to tell without aggrandizement, which would be wrong! I don’t got a [problem] with Franco but he ain’t Latino!”

Much like James Franco, John Leguizamo has been in a huge number of movies, most of them not very memorable. Perhaps his best movie was Baz Luhrman’s Moulin Rouge, in which he played (quite well) French painter Henri de Toulouse-Lautrec, despite being neither an inbred French aristocrat nor disabled (due to his inbreeding, Toulouse-Lautrec suffered a congenital bone disorder that caused his legs to stop growing around age 13), nor a little person (Toulouse was said to be 4′-11″ while Leguizamo is said to be 5’6.5″). It’s almost as if a talented actor can indeed play different roles.

Less well-regarded is the upscale mestizo Columbian Leguizamo’s casting as Luigi Mario in Super Mario Bros., alongside Bob Hoskins as Mario Mario, despite being not Italian, nor a plumber, nor digital.

Research by the genealogy show Finding Your Roots indicated that Leguizamo does not have Puerto Rican, Italian, and Lebanese ancestry, as he has sometimes stated.[1][7][8][9][10] His family is Colombian, and a DNA test found that his genetic ancestry includes European (mostly Spanish), Indigenous and some African roots.[1] His paternal grandfather was a wealthy Colombian landowner, and his great-great-grandfather, Higinio Cualla, was Mayor of Bogotá for sixteen years in the late 1800s, and was considered an important modernizer of the city.[1] Leguizamo had always declared that he was Puerto Rican on his father’s side, which was one of the reasons he was selected as the Puerto Rican Day Parade Global Ambassador of the Arts,[11] and marched in the parade on June 12, 2011.[12] Going further back in time, it was determined that Leguizamo’s maternal lineage includes the 16th-century Spanish conquistador Sebastián de Belalcázar, as well as Jerónimo Betuma, a 17th-century indigenous Colombian of noble birth.

John Leguizamo, while clearly part Amerindian, is basically a Conquistador-American. This entitles him to affirmative action.

“Alina of Cuba” is slated to begin production on Aug. 15, with the crew shooting in Colombia. Franco will star opposite Ana Villafañe, who portrays the title character Alina Fernandez, Castro’s daughter. The script follows Alina’s life as Castro’s illegitimate daughter and a critic of his reign in Cuba before she left the country and defected to Spain in 1993.

Franco’s casting as Fidel Castro was supported by the real life Fernandez, who is participating in the film as an on-set creative and biographical consultant.

Leguizamo’s attacks on Franco’s casting were responded to by the Spanish movie’s producer John Martinez O’Felan:

“Finding and convincing James Franco to play Castro, was a fun and challenging process and has been the collaborative work of the universe,” O’Felan said. “Because our director’s original order was to find an actor who holds a close physical resemblance to the real Castro to build from, along with finding someone Alina Fernandez would strongly endorse.”

He added, “To get there on such a tough look to cast, we used Fidel Castro’s ancient Galician heraldry as our focal compass, and then combed through the entire ranks of actors with Latin roots in Hollywood to find someone who has a similar facial structure. In executing a close search into our hopefuls through the eye of Spanish and Portuguese genealogy which the Galicians held, we found that James, by far, had the closest facial likeness of our Industry’s leading actors, meaning that the focus would be to build out his character accent and we’d have a stunning on-screen match to intrigue audiences and bring the story to life with true visual integrity. Altogether, working with such a supportive and exciting cast has been a true blessing to our team and project.”

These references to “facial structure” led to fervid responses that the filmmakers were into phrenology and calipers.

Of course, in reality, casting agents have to care about facial structure. If they don’t, the make-up artists do.

Being a handsome white man, James Franco is vastly more similar in facial structure to Castro than most Latinos.

In general, you would need a movie star to play Fidel Castro, whom Jared Taylor, among many others, says was the most charismatic individual he ever met. John Leguizamo, for instance, is a fine character actor, but he’s not a leading man and Fidel was very much the leading man.

I like James Franco as a comic leading man (“First time?“), and I’d like to see him play Castro in a comedy, although this movie sounds like a heavy family drama. Whether Franco is ideal for that is uncertain. But you can’t deny that he plausibly looks like Castro. 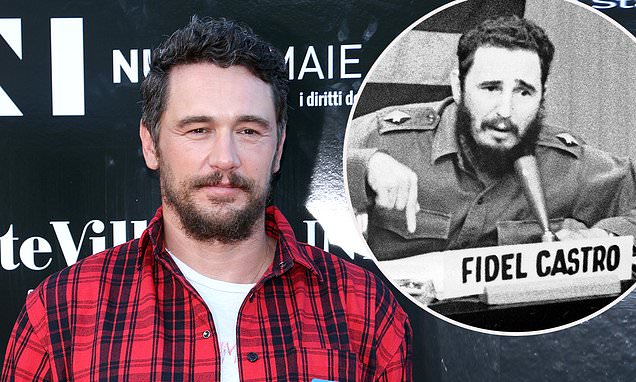 Accents are a big issue in movies, although hard to predict. Franco, as far as I can tell, does not speak Spanish. He grew up in Palo Alto and speaks California English.

Castro spoke English like a less facile Tony Montana, with a stereotypic number of hand gestures. On the other hand, Castro, by all accounts, did not strike his fellow Cubans as weirdly accented while speaking Spanish. He went on forever in his speeches, but apparently the Presidente-for-Life struck many Cubans as hugely eloquent.

Nobody has ever really figured finally how to deal with movies in different languages. For example, Spanish tends to use more syllables to express a thought than English, so Spanish speakers tend to speak faster. But that doesn’t mean they sound like they are speaking faster to other Spanish speakers, since the number of ideas expressed per minutes is, apparently, roughly the same.

The American movie industry doesn’t really know how to deal with foreign languages. For instance, most Best Picture winners are nominally in English. In this century, I believe that all the Best Picture winners are said to be with the characters mainly speaking English with the exception of Gladiator (2000), which is, conveniently, in Latin, allowing actors to speak in whatever accent is most comfortable for them. Did for example, Amadeus (1984) attempt to mimic Austrian German? As far as I can remember, not really.

But is this movie, Alina of Cuba, which is directed by Spaniard Miguel Bardem, the cousin of movie star Javier Bardem, husband of Penelope Cruz (the two cousins are scions of a family that has been famous in Spanish movies since silent movie days), going to be in English or Spanish or both? Bardem has cast a whole bunch of Spanish-surnamed actors.

Franco is an all-around talent as an actor, director, and writer, but he’s not assumed to be superb at any one of those jobs. So asking Franco to sync up his accent with the Spanish-speaking cast members is a challenge. On the other hand, he starred and directed in a pretty good 2017 movie, The Disaster Artist, as Tommy Wiseau, a weirdly accented Eastern European who directed The Room, a cult classic bad movie, so Franco may (or may not) have the technical gifts to pull off whatever Bardem asks.

Franco is not an exact double for Castro, but he’s quite close facially, and radiates that sense of smug handsome guy entitlement that helped make Castro irresistible to women (along with his life-or-death tyrannical power, which, as Henry Kissinger pointed out, is quite the aphrodisiac). According to Castro’s aides, the notches on his bedpost exceeded Wilt Chamberlain’s claim.

Franco isn’t as tall as Castro, but he’s not all that far off. CelebHeights, a useful website where one guy has converted his hobby of having his picture taken with celebrities into the most useful crowdsourced estimates of how tall famous people are, estimates Castro as 6’1″, quite tall for impoverished Cuba at the time. Franco, it says, is 5′-10.5″ and Leguizamo 5’6.5″.

His mother was born in the Canary Islands. A 2018 study of Canarians finds “it was estimated that the Canarian population is, on average at an autosomal level, 75% European, 22% North African and 3% Sub-saharan.”

The North African contribution apparently comes from the indigenous Guanches who were known in ancient times to Romans, but then apparently were cut off from the outside world during the Dark Ages. They appear to be related to the Berbers of Northwest Africa. These pagans were rediscovered by Christians in the proto-Age of Exploration when Mediterranean navigators began settling on the Canary Islands in the early 1300s. A small black element was later introduced via the African slave trade.

If Castro’s mother was exactly representative of the average Canarian in the 2018 study, that would suggest that Fidel was 1/64th black and the rest Caucasian, 88% European and 11% Guanche/Berber.

Fidel certainly looked all white. A popular meme is that Castro looked like actor Liam Neeson: 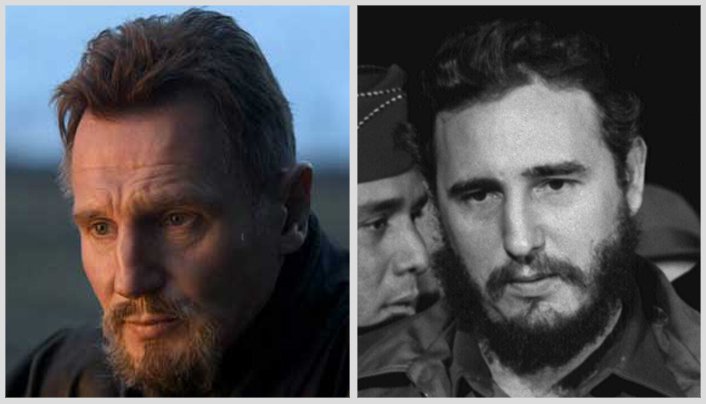 James Franco’s surname descends from his Portuguese ethnicity grandfather from Madeira in the Atlantic. His paternal grandmother was Swedish and his mother is Ashkenazi.

Madeirans are mostly Portuguese (unlike the Canary Islands, Madeira was uninhabited when the Portuguese landed in 1418), but appear to be slightly more sub-Saharan than Canarians via the slave trade. So if the best single guess is that the wavy-haired Castro was, say, 1/64th sub-Saharan through his Canarian mother, my best guess would be that the curly-haired Franco is roughly that same fraction black through his Madeiraian grandfather.

Similarly, Franco is about a quarter Levantine (assuming Ashkenazis are roughly half descended from ancient Hebrews, half from Southern Europeans), while Castro was likely about 1/8th Berber.

My rough guesses (with fractions way too precise in order to make the arithmetic add up):

I wish I could find Leguizamo’s ancestry from Finding Your Roots.