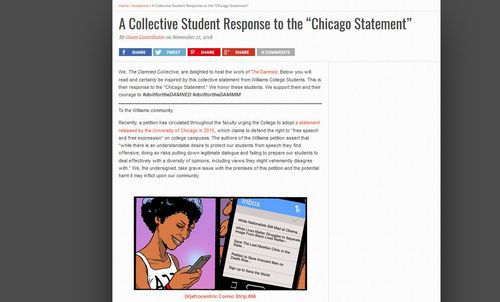 John Derbyshire On Ignoring The Students At Williams Day Care Center (Or "Williams College", As They Call It)

The background here is that a petition was circulated among the Williams faculty urging the college to adopt the 2012 Chicago Statement on freedom of expression.  Sample from that document.

For members of the University community, as for the University itself, the proper response to ideas they find offensive, unwarranted and dangerous is not interference, obstruction, or suppression. It is, instead, to engage in robust counter-speech that challenges the merits of those ideas and exposes them for what they are. To this end, the University has a solemn responsibility not only to promote a lively and fearless freedom of debate and deliberation, but also to protect that freedom when others attempt to restrict it.

I say "apparently" because I found the thing unreadable. It doesn't actually argue, it just sputters. Doing a Ctrl-F on my surname, however, I see that I am indeed referenced in the final paragraph.

John Derbyshire is a self-proclaimed "racist" and "homophobe" who was invited to speak at Williams by Uncomfortable Learning in 2016. He wrote an article proclaiming, among many other atrocious, untrue things, that "the mean intelligence of Blacks is much lower than for whites" and adamant advice like "[do] not attend events likely to draw a lot of Blacks." Adam Falk disinvited him to campus, but a free speech absolutism policy, like the one in this petition, would have limited the President and allowed Derbyshire to spew homophobia and anti-Black racism on campus. To quote Aiyana Porter at last week's Black Student Union town hall, "John Derbyshire literally said that Black people are not humans. I'm not going to consider that in my classroom …"

That was fifteen years ago; but reading through it now, I can't say my opinions have changed at all. Neither has my conviction that what really gets the pointers'n'shriekers pointing and shrieking is the "mild and tolerant" part. Heaven forfend that anyone be allowed to think that racism and homophobia, as defined in my follow-up, could possibly be mild and tolerant!

The "atrocious, untrue thing" they quote is of course a true fact in the world, confirmed by a hundred years of intelligence testing using all the means anyone has been able to devise; although the underlying reasons for it are not definitively understood.

My "adamant advice," as quoted, is just common sense, as universally practiced by nonblacks, including Progressives, and I am sure by many blacks too. I gave an illustrative example here.

And then there's that quote from a student named Aiyana Porter: "John Derbyshire literally said that Black people are not humans."

I have of course never said anything so daft. In the current ongoing moral panic over racism, Ms Porter's assertion that I did say that thing is plainly defamatory as well as demonstrably false. (I'm assuming, perhaps too charitably, that Ms Porter understands the meaning of the word "literally" …)

Should I bring a civil action against Ms. Porter? Don't think I'm not tempted.  Discussing the issue with legal friends, though, and browsing some web sites on the topic, I learn that defamation cases are very difficult to get a judgment on, and even more difficult to collect on.

(Steven Pagones did at last get a defamation judgment against Al Sharpton in the Tawana Brawley case; but the statements there were much more defamatory—abduction and rape were falsely alleged—and Sharpton never paid.)

I am therefore going to shrug this off as the twittering of imbeciles and turn aside murmuring aquila non capit muscas.