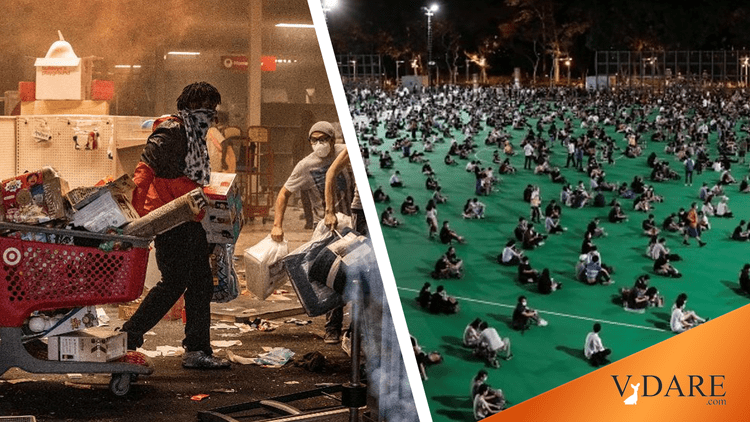 This week saw June 4th, thirty-one years on from the crushing of the anti-government demonstrations in Peking and other Chinese cities. Those demonstrations were just as impassioned as this week's; although, strange to say, I don't recall any looting of department stores.

In Hong Kong there has been a tradition of honoring that event every year on June 4th with a peaceful vigil. Tens of thousands of people take part every year—with, again, inexplicably, no looting or burning.

This year, with the ChiComs turning the vise on Hong Kong and its liberties, Hong Kong authorities banned the vigil under cover of coronavirus. To their great credit, protestors turned out anyway practicing proper social distancing.

Defying the ban on protests imposed at Beijing's behest, tens of thousands of people in Hong Kong stage a vigil for the victims of the Tiananmen Square democracy movement. We all remember. https://t.co/xaI3wcopZi pic.twitter.com/c4h8bAfa3m

One of their chants was, "End one-party rule," referring of course to the ChiCom monopoly of political power in China.

So: In the USA, violent chaotic protests all over demanding strict adherence to the One True Anti-White Faith. In Hong Kong, orderly protests for freedom of thought and political pluralism … with no looting!

What is it that makes the difference, I wonder?