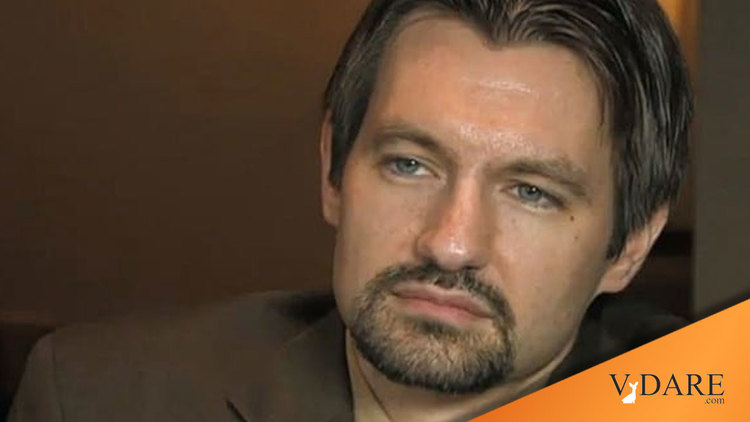 Jennifer Rubin, who scribes the pro-immigration "Right Turn" column in the Washington Post, denounces Jason Richwine for the high crime of Noticing Things:

It’s been a tough go of it for Heritage ever since it released its study asserting immigration reform would cost trillions. It was roundly criticized by both liberal and conservative analysts. Then today the dam really broke.

The Post  reports that the dissertation of the study’s co-author, Jason Richwine, asserted, “The average IQ of immigrants in the United States is substantially lower than that of the white native population, and the difference is likely to persist over several generations. The consequences are a lack of socioeconomic assimilation among low-IQ immigrant groups, more underclass behavior, less social trust, and an increase in the proportion of unskilled workers in the American labor market.” No wonder he came up with such a study; his dissertation adviser was George Borjas, a Harvard professor infamous for his crusade against immigration (legal or not).

Jennifer Korn, executive director of the pro-immigration-reform conservative Hispanic Leadership Network, responds: “If you start with the off-base premise that Hispanic immigrants have a lower IQ, it’s no surprise how they came up with such a flawed study.” She continued: “Richwine’s comments are bigoted and ignorant. America is a nation of immigrants; to impugn the intelligence of immigrants is to offend each and every American and the foundation of our country. The American Hispanic community is entrepreneurial, and we strive to better our lives through hard work and determination. This is not a community hampered by low intelligence but a community consistently moving forward to better themselves and our country.”

Heritage scrambled to distance itself from the author’s IQ views, with a spokesperson insisting that they did not relate to the viability of its study. But for the reasons Korn gives it most certainly does. No wonder the study postulates that legalized immigrants will be poor and become a drain on society.

Moreover, that Heritage engaged such a person to author its immigration study suggests that the “fix” was in from the get-go. It also raises the question of whether Heritage is now hiring fringe characters to generate its partisan studies of questionable scholarship. I expect that will be about all we hear from Heritage on the study for a while.

It certainly undermines the cause of all immigration opponents to have their prized work authored by such a character. It’s an unpleasant reminder that sincere opponents of reform should distance themselves from the collection of extremists and bigots who populate certainanti-immigrant groups. One can certainly be anti-immigration-reform and not be anti-Hispanic, but it doesn’t help to be rallying around a report by someone convinced that “the totality of the evidence suggests a genetic component to group differences in IQ.”

The facts won't calm Ms. Rubin down, because, obviously, the facts are hatestats, but here's a meta-analysis of the enormous amount of data available on the subject:

This 2001 meta-analysis of 39 studies covering a total 5,696,519 individuals in America (aged 14 and above) came up with an overall difference of 0.72 standard deviations in g (the "general factor" in cognitive ability) between "Anglo" whites and Hispanics. The 95% confidence range of the studies ran from .60 to .88 standard deviations, so there's not a huge amount of disagreement among the studies.

One standard deviation equals 15 IQ points, so that's a gap of 10.8 IQ points, or an IQ of 89 on the Lynn-Vanhanen scale where white Americans equal 100. That would imply the average Hispanic would fall at the 24th percentile of the white IQ distribution. This inequality gets worse at higher IQs Assuming a normal distribution, 4.8% of whites would fall above 125 IQ versus only 0.9% of Hispanics, which explains why Hispanics are given ethnic preferences in prestige college admissions.

In contrast, 105 studies of 6,246,729 individuals found an overall white-black gap of 1.10 standard deviations, or 16.5 points. (I typically round this down to 1.0 standard deviation and 15 points). So, the white-Hispanic gap appears to be about 65% as large as the notoriously depressing white-black gap. (Warning: this 65% number does not come from a perfect apples to apples comparison because more studies are used in calculating the white-black difference than the white-Hispanic difference.)

This fits well with lots of other data. For example, Hispanics generally do almost as badly on the National Assessment of Educational Progress school achievement tests as blacks, but that average is dragged down by immigrant kids who have problems adjusting to English. The last time the NAEP asked about where the child was born was 1992, and Dr. Stefan Thernstrom of Harvard kindly provided me with the data from that examination. For foreign-born Hispanics, the typical gap versus non-Hispanic whites was 1.14 times as large as the black-white gap. But for American-born Hispanics, the gap between non-Hispanic whites and American-born Hispanics was 0.67 times as large as the gap between non-Hispanic whites and blacks, very similar to the 0.65 difference seen in the meta-analysis of IQs.