Jeff Sessions Writes About The Senate's Surrender On Facebook: "Why Can’t Americans Get Representation In Their Own Senate?" 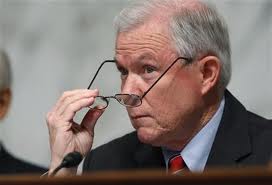 Senator Jeff Sessions just announced this ten minutes ago on Facebook. It's not on his official Senate page yet:

Sen. Sessions made the following comments on the passage of the 'omnibus' spending package a few moments ago:

“In perhaps its final ignominious act, the Reid Senate has ushered a 1,774 page omnibus funding measure through the world’s greatest deliberative body without a single amendment, a single chance for improvement, or a single opportunity for public participation.

“The United States Senate – challenged directly by the President’s unconstitutional immigration order – has laid prostrate and defenseless. Reid and his caucus have aggressively blocked a vote on my amendment to prohibit funds for the President’s illegal action – a motion that received unanimous Republican support and also five Democrat votes when last offered. Surely, Congress should not fund an action which violates our laws and imposes new laws we have refused to pass.

“But the Senate has made no attempt to defend itself, the Constitution and the citizens we are supposed to represent. Once again, Senate Democrats rallied around their leader to serve as the Administration’s imperial guard. They acted one more time to protect the White House at the expense of their own constituents. Why can’t Americans get representation in their own Senate?

“It is not a choice but a duty: the new Senate in January must have no higher priority than to block this amnesty and defend the "people who sent us here. Every American must use the days and weeks ahead to call their lawmakers and ask them simply: who do you represent?

By the way, when I see Jefferson Beauregard Sessions III (born December 24, 1946) using Facebook to get a message out to the grassroots, I realize we are living in the 21st century.