Senator Jeff Sessions has a plan to throttle Obama’s executive amnesty (now promised to occur after the election) which would be a direct attack on US sovereignty, national security and American workers during the jobless “recovery.” The planned amnesty would include work permits, photo IDs and Social Security numbers for millions of foreign lawbreakers. 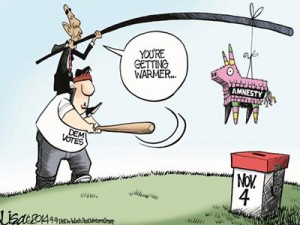 Senator Sessions’ plan is to use a procedural vote in the Senate to force a vote on legislation that would block President Obama’s planned effort to unlawfully give executive amnesty to millions.

Today would be a good time to phone Democrat senators and urge them to vote in favor of Sen. Sessions’ motion to table the amendment tree as a statement against Obama’s dictatorial amnesty.

The strategy is pretty wonky stuff, explained in Breitbart:

Senate Budget Committee ranking member Sen. Jeff Sessions (R-AL) is drawing a line in the sand on immigration on a procedural vote on Thursday, he announced in a Senate floor speech Wednesday afternoon.

Sessions is focusing on a procedural vote through which Senate Majority Leader Harry Reid needs to bring the Continuing Resolution to the floor and is working to paint the vote as a decision on whether or not to bring the House-passed immigration bills to the floor. The House bills were intended to prevent President Obama from extending unilateral amnesty to millions of illegal aliens. Reid has blocked every effort by Senate Republicans to hold a vote on the matter.

“Let’s vote,” Sessions said on the floor. “You’re either for it or not. So every member that supports Senator Reid—and we’ll have another vote on this—is as much a supporter of President Obama’s unlawful amnesty if they were sitting in a room helping him sign the order. This is the time, it’s either stopped now or it may never be stopped. And we need to vote on it. And people need to be held accountable and every American needs to know where their senator stands on the president’s unlawful assumption of power to violate plain law of the United States, to carry out a political agenda that the American people reject.”

The vote, a Sessions aide told Breitbart News, will come as part of a procedural package Senate Majority Leader Harry Reid will use to bring the Continuing Resolution to the floor. Reid is going to fill the amendment tree, barring any new amendments from being offered, and bring the CR to the floor using a Unanimous Consent (UC) agreement.

Part of that effort, the Sessions aide said, means having another, smaller amendment tree on a motion to recommit. The Sessions-pushed vote would be to table Reid’s filled amendment tree on the motion to recommit. Essentially, Sessions is saying that voting against tabling the tree on that motion would mean that Senate Democrats—and any Republican who votes with them—would be voting against allowing a debate and vote on the president’s planned executive amnesty.