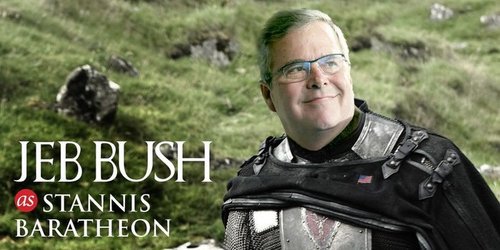 Jeb Bush and Carlos Slim: Immigration As A GAME OF THRONES Played By The Bush Clan

From the Wall Street Journal, an article that doesn’t have too much new news, but gives me an excuse to offer some perspective on the Bush Dynasty’s self-image of themselves in New World history:

Ten weeks before the collapse of Lehman Brothers Holdings Inc., a financial disaster that ushered in the global economic crisis in September 2008, Jeb Bush was in Mexico City to seek help from billionaire Carlos Slim.

Mr. Bush signed on with Lehman after leaving the Florida governor’s mansion, making it clear he wanted work as a hands-on investment banker rather than hold a ceremonial role typically given ex-politicians. Now was his chance.

Mr. Bush was a longtime acquaintance of Mr. Slim, at the time ranked as the world’s second wealthiest individual and one of several deep-pocketed investors on Lehman’s radar. “Project Verde” was supposed to bring home badly needed cash and confidence. Mr. Slim, however, was more interested in talking baseball than investing in the troubled firm.

More doors closed that summer before Lehman shut its own, but Mr. Bush, following in the footsteps of a grandfather and great-grandfather, latched onto investment banking through the worst downturn since the Great Depression.

For more than seven years, nearly the length of his two gubernatorial terms, Mr. Bush, a candidate for the Republican presidential nomination, spent as much as half of his working hours advising Lehman and later Barclays, which bought the collapsed investment bank’s U.S. business. He wasn’t an employee of the firms, said people familiar with the matter, but was paid to attend meetings, dinners and conferences where he spoke to clients and bank executives on such subjects as health care, education, immigration and energy—matters he has started taking up this year with voters.

Mr. Bush earned about $1.3 million a year at Lehman and some $2 million from Barclays, his campaign said. …

Mr. Bush received a warm welcome on Wall Street, where financial firms often seek former political figures to help open doors. At least six firms offered Mr. Bush a position when he finished his second term as governor in January 2007, according to people familiar with the matter.

When he joined Lehman in June that year, Mr. Bush was the brother of a sitting U.S. president, George W. Bush, and already had ties with the investment bank, known for its scrappy culture and aggressive management team led by chief executive Richard Fuld, a longtime Democrat.

In other words, the President’s brother took several months to decide which Wall Street firm to cast his lot with and picked the one that blew up the world less than a year and a half later.

Unlike most former politicians in finance, Mr. Bush was seen as “commercial,” almost a term of endearment on Wall Street meaning he understood how bankers prepared for meetings, advised clients and made money.

Jeb strikes me as an amiable second rater relative to his older brother, a hostile third rater.

“I’d say for the Kennedys, politics was in their DNA,” Ms. Perry said. “In the case of the Bushes, it’s both politics and high finance.” …

Mr. Bush’s fluency in Spanish and extensive experience in Latin America made him a good choice for the July 2, 2008, trip to Mexico City. He also knew Mr. Slim well: the Mexican billionaire had lent a collection of small-scale Rodin sculptures for the Florida governor’s mansion when Mr. Bush lived there. …

Mr. Bush and a handful of Lehman advisers also met with Mr. Slim in his office that day to propose a number of deals, including an investment in Lehman. The answer, the Lehman team soon learned, was no.

“Project verde was unsuccessful,” Mr. Bush wrote to a colleague after the meeting in a July 5, 2008 email made public during Lehman’s bankruptcy proceedings. “He did not express interest in jv or stock purchase.”

While refusing to pour his money down the Lehman rathole, Slim went on to bail out the New York Times. It’s almost as if Slim understands America better than the Bushes do …

The background on all this is that the Bush family has been interested in reversing Mexican economic nationalism / protectionism — highlighted by the 1938 kicking out of American and British oil companies (recently reversed) — for a very long time. There’s a lot of money to be made grinding down the border between America and Mexico.

George H.W. Bush named the oil firm he cofounded in Texas in 1953 Zapata (similarly, George W. Bush named his oil firm Arbusto). By 1960 the elder Bush had hired a Mexican front man, Jorge Diaz Serrano, to allow Zapata to operate in Mexican waters. Diaz Serrano later went on to be head of Mexico’s Pemex monopoly and to steal so flagrantly during the late 1970s boom that he was one of the three government officials symbolically imprisoned for corruption by the new PRI president elected in 1982. 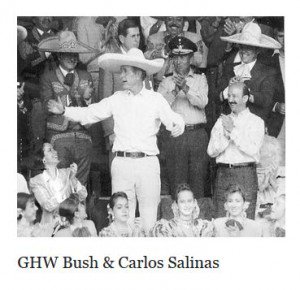 Much of the elder Bush’s presidency consisted of reacting to various unexpected developments, such as the decline of the Soviet Union, the invasion of Kuwait, the recession, the Los Angeles riots, and so forth. But one exception to this “in-box Presidency” where Bush was more proactive was NAFTA, helping get Mexico to join the trade agreement long underway between the U.S. and Canada.

The elder Bush used his Spanish-speaking son Jeb and Mexican daughter-in-law Columba Bush in a diplomatic role of building ties with the Salinas clan ruling Mexico.

In 1988, as a special gesture to Salinas, Bush sent his daughter-in-law Columba to his inauguration. …

The vast bulk of Carlos Slim’s fortune derives from President Salinas selling him the Mexican government’s telecom monopoly, so the Bushes and Slim are linked at least through their mutual friendship with the Salinases.

Similarly, GWB came to office in 2001 with as a very high priority negotiating an immigration deal with the new PAN government of Mexico. Why? Why not? Doing deals with Mexico is what Bushes do.

The Bushes’ ties to Mexico, however, have not been free from controversy. During the first Bush Administration, Jeb and Columba became close to Raúl Salinas de Gortari, the then President’s powerful and controversial older brother. 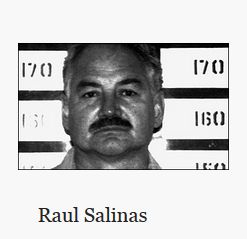 After Salinas left office in 1994, the Salinas family fell from grace in a swirl of drug-related corruption and crime scandals. Raúl was jailed and convicted on charges of money laundering and of masterminding the assassination of his brother-in-law; after spending 10 years in jail, Raúl was acquitted of both crimes.

Another Salinas brother, Enrique, was found dead in a car in 2004, apparently murdered.

With the scandal unraveling, Jeb’s friendship with Raúl did not go unnoticed. “There has been a great deal of speculation in Mexico about the exact nature of Raúl Salinas’ close friendship with former President George Bush’s son, Jeb. It is well known here [Mexico] that for many years the two families spent vacations together–the Salinases at Jeb Bush’s home in Miami, the Bushes at Raul’s ranch, Las Mendocinas, under the volcano in Puebla. There are many in Mexico who believe that the relationship became a back channel for delicate and crucial negotiations between the two governments, leading up to President Bush’s sponsorship of NAFTA,” wrote Mexican intellectual Jorge G. Castañeda, in a 1995 op-ed in The Los Angles Times. Castañeda later became Mexico’s Foreign Minister.

Jeb has never denied his friendship with Raúl, who keeps a low profile in Mexico. Kristy Campbell, spokesperson for Bush, did not respond a request for comment. …

After leaving the Governor’s mansion in 2007, Jeb continued to cultivate his connections to Mexico’s powerful elite. … Later McCain and Bush dined at the U.S. Embassy with some of Mexico’s most powerful businessmen, including Carlos Slim Domit, telecom mogul Carlos Slim Helú’s older son.

So, much of the background of the immigration issue is tied into a Game of Thrones played by clans like the Bushes, Salinases, Slims, etc. But we’re not supposed to notice that. We’re supposed to believe that it’s all about fighting the good fight against white racism, so therefore you are a racist if you are skeptical about what the Bushes are up to.