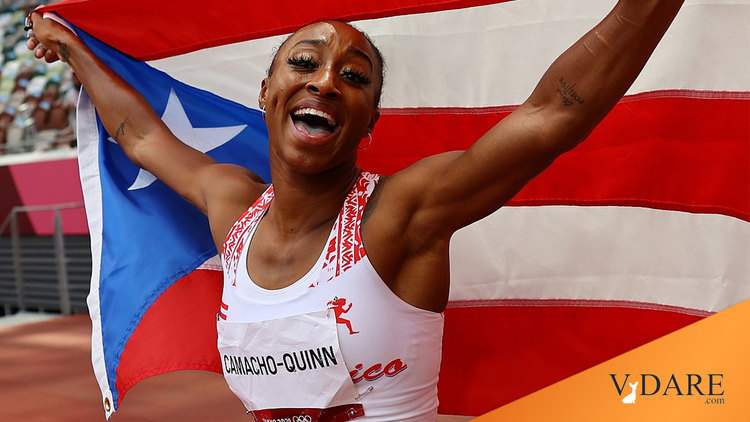 The Caribbean island of Puerto Rico is an autonomous U.S. territory but not a state. Its residents are U.S. citizens. However, paradoxically, Puerto Rico has its own Olympic team.

Puerto Rico has been sending a team to the Olympic games since 1948. In fact, in 1980, when the U.S. boycotted the Moscow Olympics, the Puerto Rican team made a special point to go to Moscow and compete.  By 2012, Puerto Rico had won eight Olympic medals. See my 2012 article Doesn’t Puerto Rico’s Passionate Support For Its Olympic Team Tell Us Something?

In the 2016 Olympics tennis player Monica Puig won Puerto Rico’s first gold medal. She was the daughter of a Cuban father and Puerto Rican mother.

Most recently in the so-called 2020 Olympics (held in 2021), in Japan, another gold medal has been won for Puerto Rico.

The medal was won by Jasmine Camacho-Quinn, right, in the 100 meter hurdles.

Jasmine beat Kendra Harrison of the U.S., who got the silver, and Megan Tapper of Jamaica, who got the bronze.

You can watch her victory here and the medal ceremony, with the raising of the Puerto Rican flag, here.

Definitely, Jasmine comes from a very athletic family, with some good athletic genes.

Her father James Quinn was a hurdler, her mother Maria Milagros Camacho was a sprinter and long jumper.

They were both athletes at a college in South Carolina, which I assume is where they met.

Jasmine’s brother Robert Quinn is a football player in the NFL, an outside linebacker for the Chicago Bears.

Therefore, Jasmine’s brother in the NFL is known as Robert Quinn.

Jasmine, on the other hand, at least in her Puerto Rican career, uses both surnames, but not as they do in Puerto Rico. She goes by Camacho-Quinn, with the Spanish name first.

When Jasmine Camacho-Quinn broke an Olympic record and won a gold medal in Tokyo, she celebrated a historic win as an athlete, a Black representative of Puerto Rico and a member of a family she just recently met.

Camacho-Quinn made history twice in Tokyo. She beat Kendra Harrison of the United States in the women’s 100-meter hurdles and set a new Olympic record of 12.26 seconds in the semifinal.

As Camacho-Quinn mounted the Olympic stage on Monday, "La Borinqueña," the island's national anthem, rang in the background and she wore Puerto Rico's national flower in her hair.

The article quotes the reaction of a black Puerto Rican.

Monica Velez, born in Guaynabo, Puerto Rico, said she was brought to tears seeing the Puerto Rican flag worn by a woman who looked like her on the Olympic stage.

"There's nothing like seeing my island win but even better is seeing a beautiful Black boricua doing it. Someone who looks like me," Velez told USA TODAY. "The representation, the love the island is showing her, it's amazing."

Velez has been fan of Camacho-Quinn since her first Olympic run in 2016. She said that for most of her life, Velez' own Blackness felt erased from her Puerto Rican heritage, but now she feels represented by Camacho-Quinn.

The article quotes a professor.

Angel Jones, a professor at Southern Illinois University Edwardsville, said on Twitter that Camacho-Quinn is reshaping the narrative of what Puerto Ricans look like and giving young girls of all colors a role model.

"Jasmine, in all her melanated glory, is challenging dominant narratives of what Latinx peopled [sic] look like," Jones, who is Puerto Rican, told USA TODAY.

"Jasmine, in all her melanated glory, is challenging dominant narratives of what Latinx peopled look like," Angel Jones, who is Puerto Rican, told USA TODAY.
📸 James Lang, @usatodaysports pic.twitter.com/EACYjO99u8

Although Camacho-Quinn was born in South Carolina, she decided to run for Puerto Rico to honor her heritage because her mother was born in Puerto Rico.

“It means a lot to represent such a small country,” Camacho-Quinn told reporters. She added she was proud to represent Puerto Rico, because "it gives little kids hope."

Apparently, her calling Puerto Rico "a small country" provoked some objections, because they added this at the top of the article:

Corrections & Clarifications: A version of this story was updated to clarify a quote by Jasmine Camacho-Quinn, who called the U.S. territory of Puerto Rico a country.

The added clarification was after Camacho-Quinn's comment. It read "Puerto Rico is a U.S. territory, although some refer to it as a country or nation of its own."

Yes, Puerto Rico is a U.S. territory. But culturally, it is another country.  My position is that it should be independent. To see why I think that, read my article ¡Viva Puerto Rico Libre! Free Puerto Rico (And The U.S.) Now!

Camacho-Quinn's journey to Tokyo led her to reconnect with mother's side of the family in Puerto Rico. At 19, she traveled to the island for training and was finally able meet her grandmother. A year later, her "Abuelita Carmen" died.

"After 19 years, I finally got to see you, meet you & hug you. I finally found my 'twin' I would say," Camacho-Quinn wrote on Instagram. "Because I never knew who I looked like truly. I’m so glad I got to meet you."

The article includes an Instagram photo of 19-year old Jasmine with her grandmother.

Congratulations to Jasmine Camacho-Quinn and I wish her the best.

But with all due respect, isn't the existence of the Puerto Rican Olympic team, and the way it's seen by Puerto Ricans, another indication that Puerto Rico should be an independent country?