Rolling Stone, Once a Counterculture Bible, Will Be Put Up for Sale

From a loft in San Francisco in 1967, a 21-year-old named Jann S. Wenner started a magazine that would become the counterculture bible for baby boomers. Rolling Stone defined cool, cultivated literary icons and produced star-making covers that were such coveted real estate they inspired a song.

But the headwinds buffeting the publishing industry, and some costly strategic missteps, have steadily taken a financial toll on Rolling Stone, and a botched story three years ago about an unproven gang rape at the University of Virginia badly bruised the magazine’s journalistic reputation.

That “gang rape at the University of Virginia” still remains unproven due to Rolling Stone’s having botched journalistic methodology. If Rolling Stone had crossed all the T’s and dotted all the i’s, Haven Monahan would be behind bars right now.

Also, catfishing is just a boring hobby of hicks who don’t live anyplace scenic enough for flyfishing. Catfishing has nothing to do with this “gang rape” in Charlottesville.

And so, after a half-century reign that propelled him into the realm of the rock stars and celebrities who graced his covers, Mr. Wenner is putting his company’s controlling stake in Rolling Stone up for sale, relinquishing his hold on a publication he has led since its founding. …

Rolling Stone suffered a devastating blow to its reputation when it retracted a debunked 2014 article about a gang rape at the University of Virginia. A damning report on the story by the Columbia Graduate School of Journalism cited fundamental journalistic failures. 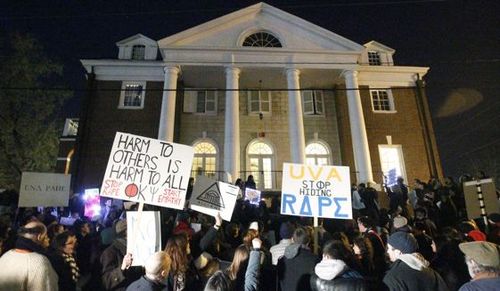 It wasn’t hate speech, it was “journalistic failures.” There’s a long report on it by the Columbia Graduate School of Journalism so you shouldn’t have an opinion on it unless you’ve read the entire report.

The article prompted three libel lawsuits against Rolling Stone, one of which led to a highly publicized trial last year that culminated with a federal jury awarding the plaintiff $3 million in damages.

Rolling Stone also settled with the fraternity that suffered a Kristallnacht of broken windows due to Rolling Stone’s hoax article for $1.65 million.

As far as I know, no one has ever been arrested for the Sabrina Rubin Erdely-inspired terrorist hate crime against the fraternity house.

Anyway, the important news is that the “gang rape at the University of Virginia” turned out to be a boring story about poor methodology.