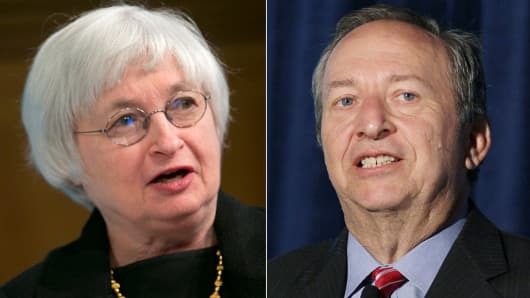 Janet Yellen v. Larry Summers: What Is And What Should Never Be Respectable Identity Politics

In Tug of War Over New Fed Leader, Some Gender Undertones

By BINYAMIN APPELBAUM and ANNIE LOWREY

WASHINGTON — President Obama’s choice of a replacement for the Federal Reserve chairman, Ben S. Bernanke, is coming down to a battle between the California girls and the Rubin boys.

Janet L. Yellen, the Fed’s vice chairwoman, is one of three female friends, all former or current professors at the University of California, Berkeley, who have broken into the male-dominated business of advising presidents on economic policy. Her career has been intertwined with those of Christina D. Romer, who led Mr. Obama’s Council of Economic Advisers at the beginning of his first term, and Laura D’Andrea Tyson, who held the same job under President Clinton and later served as the director of the White House economic policy committee. But no woman has climbed to the very top of the hierarchy to serve as Fed chairwoman or Treasury secretary.

Ms. Yellen’s chief rival for Mr. Bernanke’s job, Lawrence H. Summers, is a member of a close-knit group of men, protégés of the former Treasury Secretary Robert E. Rubin, who have dominated economic policy-making in both the Clinton and the Obama administrations. Those men, including the former Treasury Secretary Timothy F. Geithner and Gene B. Sperling, the president’s chief economic policy adviser, are said to be quietly pressing Mr. Obama to nominate Mr. Summers.

The choice of a Fed chair is perhaps the single most important economic policy decision that Mr. Obama will make in his second term. Mr. Bernanke’s successor must lead the Fed’s fractious policy-making committee in deciding how much longer and how much harder it should push to stimulate growth and seek to drive down the unemployment rate.

Ms. Yellen’s selection would be a vote for continuity: she is an architect of the Fed’s stimulus campaign and shares with Mr. Bernanke a low-key, collaborative style. Mr. Summers, by contrast, has said that he doubts the effectiveness of some of the Fed’s efforts, and his self-assured leadership style has more in common with past chairmen like Alan Greenspan and Paul A. Volcker.

But the choice also is roiling Washington because it is reviving longstanding and sensitive questions about the insularity of the Obama White House and the dearth of women in its top economic policy positions. Even as three different women have served as secretary of state under various presidents and growing numbers have taken other high-ranking government jobs, there has been little diversity among Mr. Obama’s top economic advisers.

“Are we moving forward? It’s hard to see it,” said Ms. Romer, herself a late addition to Mr. Obama’s original economic team, chosen partly because the president wanted a woman.

She said she viewed the choice of the next leader of the Fed as a test of the administration’s commitment to inclusiveness. “Within the administration there have been many successful women,” she said. “There are lots of areas where women are front and center, where women are succeeding and doing very well. Economic policy is one where they’re not.”

This controversy is an illuminating example of

I don't know much about Yellen, but Larry has been a big personality for a long time. I've written four articles defending him in the 2005 evolutionary psychology brouhaha. But, as a regulator, Larry is representative of the dominant tendency of the last generation in both parties (such as Larry's mentor Robert E. Rubin for the Democrats and Greenspan/Bernanke for the Republicans): pro-Wall Street economists or operators who tend to see attempts to regulate billionaires as at least subliminally anti-Semitic.

There's a lot to be said for this dominant standpoint, but let's also be clear that it has been dominant, and that it might well be time to try somebody, at least for a change, who doesn't suspect effective regulation of financiers is the first step to Nazism.

But of course we can't even mention this, so forget I ever said it.