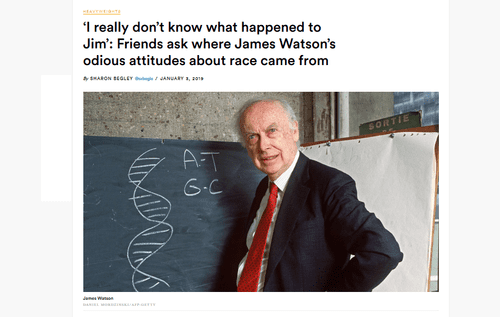 Even before a documentary on biologist James Watson aired on Wednesday night as part of PBS’s “American Masters” series,

You can watch the documentary online here.

social media was aflame with protests from scientists and others about its very existence: …

Watson had not been misquoted. He had not misspoken. He had made the same claim in his 2007 memoir “Avoid Boring People: Lessons from a Life in Science”: “There is no firm reason to anticipate that the intellectual capacities of peoples geographically separated in their evolution should prove to have evolved identically,” Watson wrote. “Our wanting to reserve equal powers of reason as some universal heritage of humanity will not be enough to make it so.” As for women, “Anyone sincerely interested in understanding the imbalance in the representation of men and women in science must reasonably be prepared at least to consider the extent to which nature may figure, even with the clear evidence that nurture is strongly implicated.” There was more like that, and worse, in private conversations, friends said.

Museums, universities, and others cancelled speaking invitations. Friends were left shaking their heads.

“I really don’t know what happened to Jim,” biologist Nancy Hopkins of the Massachusetts Institute of Technology, who in the 1990s led the campaign to get MIT to recognize its discrimination against women faculty, told STAT.

And get herself a raise. Hopkins’ study of how she deserved more money was the pinnacle of disinterested science.

“At a time when almost no men supported women, he insisted I get a Ph.D. and made it possible for me to do so,” she said. But after 40 years of friendship, Watson turned on her after she blasted the claim by Harvard University President Lawrence Summers in 2005 that innate, biological factors kept women from reaching the pinnacle of science.

“He demanded I apologize to Summers,” Hopkins said of Watson. (She declined.) …

Another factor was at work, friends told STAT. Watson made his one and only important scientific discovery when he was only 25. He discovered nothing of importance afterward, even as colleagues were cracking the genetic code or deciphering how DNA is translated into the molecules that make cells (and life) work.

Actually, Watson himself recognized in his 30s that his best years as a researcher were behind him and set about transitioning to his Man of Science role as a research manager, fundraiser, and author: kind of like Neil deGrasse Tyson, but with huge executive responsibilities as CEO of world class medical research lab. Besides writing one of the most famous scientific memoirs, The Double Helix, he wrote a major textbook, and in the late 1960s took over the decrepit Cold Spring Harbor lab, and revamped it into a major cancer research powerhouse.

The outpouring of snide articles about how we should ignore Watson’s views because he’s a “loose cannon” is just wrong. Watson is not some lone eccentric. Although his place in the history books as a discoverer alongside Darwin and Mendel is secure, he also is a central leader in the life sciences in the 21st Century.

Watson’s an unusual combination: both an acerbic personality frequently surrounded by drama and an impressive institution builder—a little like George Steinbrenner, the owner of the New York Yankees. Indeed, Watson’s new autobiography is organized as a self-help book for leaders of scientific institutions, complete with 108 “Remembered Lessons,” such as “Manage your scientists like a baseball team”—in other words, scout for young talent and release most researchers by the time they hit 40 because they are then over the hill as discoverers. Thus, at that age, Watson took on the leadership of Cold Spring Harbor Laboratory.

Yet Watson viewed himself “as the greatest scientist since Newton or Darwin,” said a longtime colleague at CSHL (who asked not to be identified for fear of retaliation from the lab). To remain on the stage and keep receiving what he viewed as his due, he needed a new act to retain a few photons of the public spotlight.

No, before being unpersoned for political incorrectness in 2007, Watson was omnipresent on the public stage (e.g., he was frequently interviewed on PBS’s Charlie Rose Show).

… In the 1990s, Watson became smitten with “The Bell Curve,” the 1994 book that argued for a genetics-based theory of intelligence (with African-Americans, it contended, having less of it) and spoke often with its co-author, conservative political scholar Charles Murray. The man who co-discovered the double helix, perhaps not surprisingly, regarded DNA as the ultimate puppet master, immeasurably more powerful than the social and other forces that lesser (much lesser, in his view) scientists studied. Then his hubris painted him into a corner.

Although the book’s central thesis has been largely discredited

, Watson embraced its arguments and repeated them to anyone who would listen. When friends urged him to at least acknowledge that the science in “The Bell Curve” was shaky (or worse), Watson wouldn’t hear of it. …

Friends traced Watson’s smartest-guy-in-the-room attitude, and his disdain for experts, to 1953. When he joined Francis Crick at England’s Cavendish Laboratory,

Perhaps, but my impression is that being in the same room with Francis Crick cured Watson of his “smartest-guy-in-the-room attitude.” The rest of his career is testimony to Watson’s often stated notion that he didn’t have the innate brainpower to keep doing what he’d done in his 20s, so he needed to carve out a broader career for himself.

I’m kind of reminded of the career in baseball of Joe Garagiola, who grew up playing catcher in St. Louis youth baseball with Yogi Berra. Garagiola was good enough to make the majors, but comparing himself to Berra as a teen taught him young that to stay in baseball he’d need other skills, such as telling Yogi Berra Jokes. He eventually became the main network TV baseball color analyst. (This may be the first analogy in human history to compare Yogi Berra to Sir Francis Crick.)

Watson knew virtually nothing about molecular structures or “the basic fundamentals of the field,” Jerry Adams, also one of Watson’s graduate students, told a Cold Spring Harbor oral history project; Watson was “self-taught.” He saw his double-helix discovery as proof that outsiders, unburdened by establishment thinking, could see and achieve what insiders couldn’t.

Um, for my entire adult life — not to mention the entire lives of my ancestors going waaaaay back — this attitude had been celebrated as the core of the scientific revolution which built the modern world. If this is officially considered crimethink, then I think we can go ahead turn the lights out, because science is basically over. Evidently, “scientists” are now being instructed to return to their original role as court astrologers — just with an updated wardrobe, props and jargon.

That belief became cemented in the 1960s, when Watson dragged Harvard’s biology department kicking and screaming into the molecular era. Disdaining the establishment, he seemed to conclude, pays off.

Scientists who have known and observed Watson for decades say he believed in finding truths in his gut. “Jim is intuitive,” MIT biologist H. Robert Horvitz told the oral history project. His gut gave him “an uncanny sense of science.”

Perhaps that’s why Watson came to believe that his intuition about race and IQ and genetics was a stronger guide to truth than empirical research.

“He believed what he believed and wasn’t going to change his view,” the lab colleague said. “As the scientific environment became even less hospitable to [the “Bell Curve” thesis], he became even more adamant. He loved trashing the establishment, whatever it is.”

Watson has told friends he cares deeply how history will see him. He cares what his obituaries will say. But not enough, apparently. Toward the end of the documentary, called “Decoding Watson,” director Mark Mannucci asked if his views on race and intelligence have changed. “No,” came the reply.

“To the extent that I’ve hurt people, of course I regret it,” Watson added. “I like black people, so why would I want to hurt them?” But “there is a difference, on average, between blacks and whites on IQ tests,” he said. And much as he “would like there to be new knowledge” showing that environment and experiences have a greater influence on intelligence than genes, “I haven’t seen any.” He squints into the camera, unseeing.

Whereas everybody else knows that 1994 The Bell Curve was completely debunked by that giant breakthrough study by … uh … oh, yeah, by Stephen Jay Gould’s 1981 study of Samuel Morton’s skull size research in 1859!