"It Would Be The End Of America": Heartlanders Reject Trump’s Amnesty for Dreamers

In the big capital city, “Let’s make a deal” is the operating principle of the legislative playbook, and with the Democrat party sliding into leftward extremism, the compromises proposed have become progressively uglier. Citizenship for nearly two million Dreamer pests is now on President Trump’s table — to the shock of many who believed his “No amnesty” pledge that was central to his campaign’s message of immigration enforcement.

Legislation is a messy business, and Americans are supposed to get on board with a process that leads to rewarding illegal aliens — that’s the plan in the White House at any rate.

But out in the heartland, citizens don’t want to accept yet another amnesty that shreds more of our national sovereignty and creates millions of additional Democrat voters in the future. Any Republican who supports amnesty is pounding a nail in the GOP coffin — the people understand that.

Congress has already passed seven amnesties, so you can understand why foreigners continue to break into the United States — they know they will eventually be rewarded by feckless Washington. And the illegal alien runs on the border have returned to Obama levels, a surge which coincided with discussions in official Washington of a new amnesty.

Normal people understand the disastrous psychology of continued rewards for bad behavior — we see it every day in the immigration anarchy the elites have foisted upon us. As Senator Charles Grassley noted regarding his vote for Reagan’s 1986 amnesty, “You know what I found out? If you reward illegality, you get more of it.”

Furthermore, the message of an amnesty for millions from Trump the Enforcer is even worse — if he won’t defend law and sovereignty, who will?

Saturday’s Washington Post had a suitably dire headline on its front page from a Wisconsin town hall: 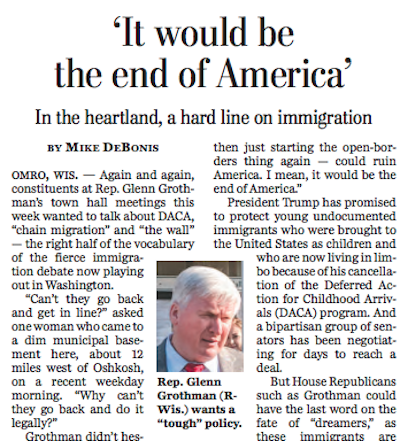 The congressman meeting with constituents was Rep.Glenn Grothman, who has a lifetime (two terms) immigration enforcement grade of A+ from NumbersUSA.

OMRO, Wis. — Again and again, constituents at Rep. Glenn Grothman’s town hall meetings this week wanted to talk about DACA, “chain migration” and “the wall” — the right half of the vocabulary of the fierce immigration debate now playing out in Washington.

Grothman didn’t hesitate: “I’ll do all I can to hold out for as tough a position as we can get,” he told the woman, who declined to give her name to a reporter. “We’d rather shut down the government rather than go down the path of ruining America. And I think doing what some of those Democrats wanted — immediate legality for all these people and then just starting the open-borders thing again — could ruin America. I mean, it would be the end of America.”

President Trump has promised to protect young immigrants who were brought to the United States illegally as children and who are now living in limbo because of his cancellation of the Deferred Action for Childhood Arrivals (DACA) program. And a bipartisan group of senators has been negotiating for days to reach a deal.

But House Republicans such as Grothman could have the last word on the fate of “dreamers,” as these immigrants are known.