Steve Sailer  did a post on the "Messages To Straight White Men" meme, and there's a lot of stupid hate there. (As Sailer pointed out, the publishing industry is already heavily female-dominated, and quite gay.)

I just wanted to point out this one from writer Natalie Elbert: 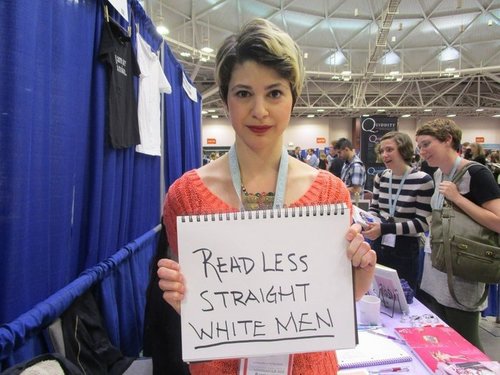 What she means is "Read fewer straight white men."

A copyeditor for the NYT (where they can at least get this right) explains:

The basic rule for precise use of “less” and “fewer” is simple (though we slip often). Use “fewer” with countable, individual things, and “less” with uncountable amounts, volumes, etc. So: “I should drink less coffee,” but “I should eat fewer doughnuts.”

Most people never think about this and do it automatically. You know that you have less money, and fewer dollars, less whiskey but fewer shots, less ammunition and fewer cartridges, et cetera.

The error, when it comes out, usually comes out in the direction Ms. Elbert has it. Native speakers of English never say "fewer money" or "fewer ammunition", and but they do say "less dollars", "less cartridges", and as in this case "less straight white men."

It's a distinction that should be understood by any professional writer. If you don't know it, perhaps you shouldn't plan to take over and destroy the publishing industry.