It's On: Referendum in Gear to Repeal California DREAM Act

California Assemblyman Tim Donnelly has hit the ground running with a referendum to disallow the new law giving taxpayer financial aid to illegal alien college students. Governor Brown signed the bill into law on Saturday and Donnelly filed the papers on Monday to begin the referendum process that will hopefully remove the despised law.

Assemblyman Donnelly’s organizing website is up: see Stop AB131.com. Citizens who want to help can send money or sign up as clipboard warriors to gather signatures on petitions. On Tuesday, the John and Ken radio show reported that Donnelly had received over 5,000 emails in the first 24 hours.

Many Californians are outraged that in this time of extreme financial crisis, a new entitlement has been created for illegal aliens that will cost an estimated $40 million annually and will aid lawbreakers to take college slots that should go to citizen kids.

California has had in-state tuition for illegal aliens since 2001.

Below, Assemblyman Donnelly roused the citizenry against the scourge of illegal immigration in California last spring. 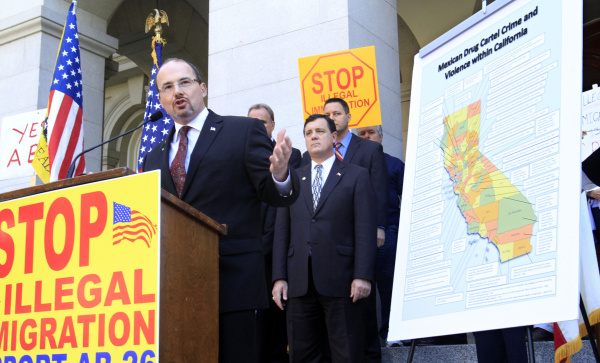 “You hear heartbreaking stories of some (illegal-immigrant) kids who are obviously very intelligent, and your heart breaks for them because their parents broke the law and you don’t want them to have to pay,” Donnelly, R-Twin Peaks, said by phone Monday evening. “But is it fair for every American citizen and every legal immigrant to have their dreams deferred so those illegals can have theirs?”

Assembly Bill 131 by Gil Cedillo, D-Los Angeles, qualifies illegal immigrants who are accepted into California public colleges to receive Cal Grants, community college fee waivers and other state financial aid beginning in 2013. According to the legislation, state aid will only be dispersed to illegal immigrants after it’s been given out to all qualified legal residents or U.S. citizens.

“Going to college is a dream that promises intellectual excitement and creative thinking,” Gov. Jerry Brown said in a statement after signing the bill into law on Saturday. “The Dream Act benefits us all by giving top students a chance to improve their lives and the lives of all of us.’”

The undocumented students must be working toward legal citizenship, have a high school diploma or equivalent and have attended a California high school for three years.

“Many of them were brought here when they were 5 or 6 years old, so they had nothing to do with the fact they are here,” said Richard Turnbull, trustee with the Democratic Club of Victor Valley. “The fact is it can only be a positive effect because they speak English already, they’ve already obviously passed all their prerequisites in order to be a university student or college student. … I believe that it is an investment in America’s future.”

But Donnelly argued the bill included no mechanism for ensuring legal residents get the aid first. He believes the Dream Act will incentivize more illegal immigration and that taxpayers shouldn’t be subsidizing the education of illegal-immigrant students, even if it was their parents who brought them here illegally.

“All children are subject to the consequences of their parents’ actions, and it isn’t the role of government to stand in the gap there and solve every problem because some parents have chosen to act irresponsibly, to put their kids at risk,” he said.